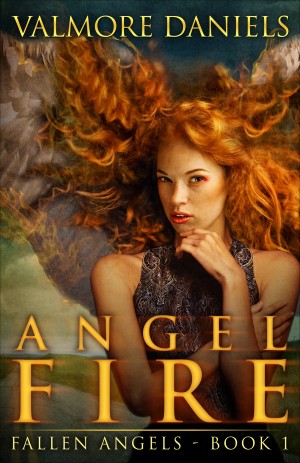 By Valmore Daniels
Rated 4.00/5 based on 1 reviews
I am cursed with a dark power: When I’m in danger, my subconscious summons elemental fire. I cannot control this. One night I was attacked. The fire raged. I survived but the power killed my parents. I went to prison for ten years. Now I'm out and want to rebuild my life; but the man who attacked me is back. I can sense the power growing. If I can't control it, it will destroy everyone I love. More
My name is Darcy Anderson, and I am cursed with a dark power: Whenever my life is in danger, something inside me summons elemental fire to protect me. I cannot control this.

One night, I was attacked in my home. The fire ... it raged out of control. I survived the inferno, but my house burned to the ground - with my parents inside.

I was at a loss to explain to the courts what happened, and so they sent me to prison for ten years for manslaughter.

Now I'm out on parole, and all I want is to return to my home town and rebuild my life; but the man who attacked me is back to finish the job he started.

I can sense the power in me growing. If I can't control it, it will control me and destroy everything - and everyone - I love.

Valmore Daniels has lived on the coasts of the Atlantic, Pacific, and Arctic Oceans, and dozens of points in between.

His enthusiasm for travel is only surpassed by his passion for telling tall tales.

Valmore Daniels has written a complex and well-rounded character in Darcy Anderson, a woman who can set fire to things telepathically. The book opens with her leaving prison after doing 10 years for killing her parents in a fire which she accidentally started. The rest of the book focuses on Darcy coming to terms not only with what she did and her strange "affliction" but also the trials and tribulations of returning to her hometown where she's essentially an outcast.

There was quite a bit of backstory to this book as Darcy's family history plays an important role but Daniels handled it superbly, feeding little bits of it here and there as necessary. There were a couple of flashbacks which broke up the flow a little, but otherwise the story unfolded naturally. In fact, Darcy's backstory was well thought out as was the "world". I totally began to believe that telepyrosis could be real and Daniels has obviously researched the biblical side of angels.

Although the writing is sometimes not as strong as it could be, Daniels has nailed the dialog. It's so real and fresh and gives an acute insight into the characters. The only problem with the dialog was there wasn't enough of it! Sometimes Darcy's introspection slowed the book down, but usually not for long before some action took place.

I highly recommend this book. The Fallen Angels series is going to be terrific if this first book is any indication.

You have subscribed to alerts for Valmore Daniels.

You have been added to Valmore Daniels's favorite list.

You can also sign-up to receive email notifications whenever Valmore Daniels releases a new book.