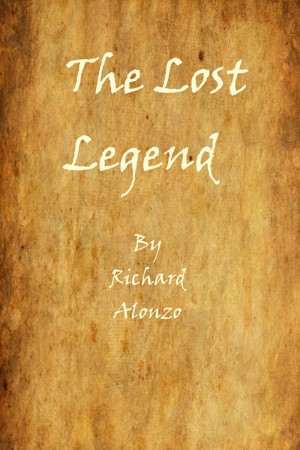 By Richard Alonzo
The Lost Legend is the story of how the world came into being, man first set foot upon it and of the heroes who forged the first and perhaps the greatest Kingdom of men and its fall. More
Recovered from the long forgotten archive deep beneath the ruins of the golden temple, the lost legend takes the reader on a whistle stop tour of the creation of the world in ‘Vallen and the Void’. The long and often bloody battle between the forces of good and evil in ‘The First Age Men’ culminating in the founding of the first empire. Before mans fall from grace and the promise of redemption in ‘The Second Age of Men’. Who knows what other stories lie hidden in the ruins?
Download: epub mobi (Kindle) pdf more Online Reader
rtf lrf pdb txt
Price: Free! USD
Add to Library
Create Widget
Tags: fantasy short fantasy fantasy epic fantasy adventure novels fantasy about other worlds
About Richard Alonzo

Born in the shadow of St Andrews in 1961, home of Birmingham City FC Soccer club (we all have our crosses to bear) the journey that led to the publication of Richard’s first novel ‘Rebels’ on Smashwords in November 2013 has been one long roller-coaster ride.

From his formative years in the inner-city being educated in a school with shall we say a ‘reputation’ he went on to study Peace Studies at Bradford University’s internationally renowned School of Peace Studies, later acquiring a second degree in psychology from The Open University.

Hooked on fantasy since first reading Lord of the Rings at the tender age of 16, Richard became an avid sci-fi fan at University in those rare moments of down time between studying and socialising.

Having changed his career more times than some men are said to have changed their underwear, he’s gotten up at ungodly hours to sell newspapers and cleaned offices late into the evening in what can best be described as a character building exercise.

After graduation he pursued a career in nursing, before a back injury forced him to retrain as a computer programmer and take a desk job working for a number of large, well-known UK corporations,internet start-ups and venture capitalists. He witnessed firsthand the evolution of computing from the mainframe to the desktop and the birth of the internet as he travelled far and wide as a jobbing contractor/web developer. Rapidly tiring of travelling business class (at the client’s expense) he left the corporate world to work for an environmental charity before moving on to pursue a new career as a community development worker.

Along the way Richard attended the odd Creative Writing course or two where despite the positive feedback he was only able to find a market for his non-fiction writing mainly in the form of magazine articles. Inspired to take up the fictional pen once more when his oldest daughter introduced him to National Novel Writing Month (http://nanowrimo.org/) he’s taken the plunge and begun publishing his musings here on Smashwords.

When not writing, readers may find him pursuing his other passion of walking in the mountains and National Parks of UK or very occasionally at the local gym.

Finally when asked to sum up his writing in a single sentence he replied. “I would love to sit down and write my autobiography one day, but looking back on my life I can’t help feeling it would be a lot less believable than my fiction.”

You have subscribed to alerts for Richard Alonzo.

You have been added to Richard Alonzo's favorite list.

You can also sign-up to receive email notifications whenever Richard Alonzo releases a new book.