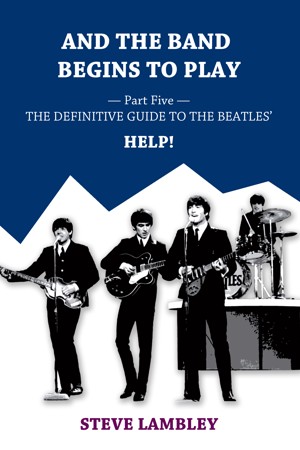 And the Band Begins to Play. Part Five: The Definitive Guide to the Beatles’ Help!

Going further than the usual song-by-song, album-by-album guide, it is a record of every moment that the Beatles came together to record, from the first EMI session in 1962 to their acrimonious break-up in 1970. In short, this 12-volume set is the blueprint to every single recording made by the Beatles: 12 albums and 22 singles which make a portfolio of 208 songs that undeniably changed the shape of modern music forever.

From 'Love Me Do' to 'Let It Be', Steve Lambley provides full analysis of every track not only for its lyrical meaning, its position in the Beatles catalogue and the impact it made on the charts, but also from the point of the science of the songs. Thanks to the author's astute understanding of just how music works, as well as the recording processes of the day, this book includes a level of a musical analysis rare to career-spanning tomes today.

The book includes a detailed description of the recording process of every track, with a breakdown of the instrumentation and details of overdubs. What's more, And the Band Begins to Play explains the wealth of production innovations and recording techniques used by the group which continues to inform popular music today.

The story of the group's music also tells the story of the group itself. The book therefore takes the reader by the hand on a magical tour through the conquering of America, the band's film, TV and radio appearances, the "bigger than Jesus" storm, the death of Brian Epstein, the Maharishi experience, the rise and fall of the original Apple business, and much more.

The appendices include detailed listings covering all the Beatles' recordings, including:

Unquestionably, the Beatles remain the key band of the rock era. And the Band Begins to Play tells the story of their unique musical legacy.

I was born in 1960, and have been a Beatles fan all my life. One of my earliest memories is of being encouraged to sing a precocious ‘She Loves You’ into my Dad’s reel-to-reel tape recorder.

I'm now a freelance designer/writer/translator based in London and The Hague. As such, I've written extensively on a range of subjects for clients from airlines and law firms to the United Nations in New York. But my passion is music, in particular the music of the greatest band of all time.

However, I'm interested in most forms of music, and am also fascinated by musical theory and what makes music “work”. Analysing the work of (according to Tony Palmer) “the greatest song writers since Schubert”, who wrote instinctively with no formal musical training – or indeed ability to actually read music, was irresistible, and I hope my fascination shines through in my writing.

'And the Band Begins to Play', my first book, involved around twenty years of painstaking research – the publication of Mark Lewisohn’s 'The Complete Beatles Recording Sessions' first got me thinking it would be interesting to pull together information about individual Beatles songs in the form of a definitive reference book. It has been a true labour of love and my passion for it has never diminished.

Since then I have published a further book on the nitty gritty of the Beatles' songs, both recorded and performed live. 'The Songs the Beatles Played' gives detailed information on the the songs recorded by the Beatles, together with around 80 of the key songs the group played live but never recorded.

You have subscribed to alerts for Steve Lambley.

You have been added to Steve Lambley's favorite list.

You can also sign-up to receive email notifications whenever Steve Lambley releases a new book.