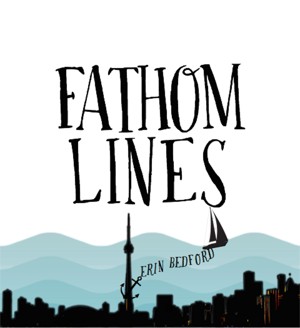 But why did she bury that box full of keepsakes and who would be cruel enough to dig it up and send it to her so many years later?

The mystery is slowly revealed as Vee drifts in and out of memories--her childhood in Northern Ontario during the 1950s and 1960s, her love affair with a charming Quebecois man, a family wrenched apart by pride, a loss that unhinged her--and as her daughter, Lise, pieces together the puzzle of her mother’s past in an attempt not only to understand her mother's life, but also her own.

"[Fathom Lines] is a poignant and moving story about two women, mother and daughter, searching for an understanding of the mother’s past and present. [Bedford] is a talented writer who uses vivid images and graceful language to paint scenes of powerful emotion in the lives of the two women."
Kim Moritsugu, author of The Restoration of Emily

Erin Bedford (1979-) was born in Beamsville, Ontario and grew up there and at the family cottage on Manitoulin Island. She moved to Toronto for university, and after graduation, attended and won a Certificate of Distinction for her completed manuscript from the Humber School for Writers. "Fathom Lines" is her first novel.

You have subscribed to alerts for Erin Bedford.

You have been added to Erin Bedford's favorite list.

You can also sign-up to receive email notifications whenever Erin Bedford releases a new book.