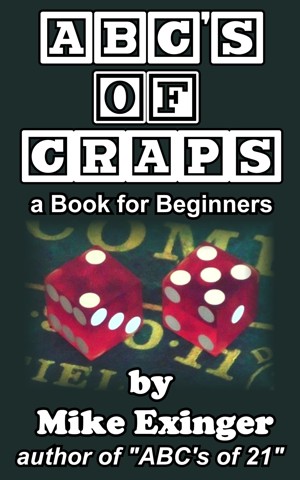 ABC’s of Craps: a Book for Beginners

By Mike Exinger
It’s easy to spot the Craps tables: The crowd is energized and the action is hot. Many players never play this game – they think it too complex, with unusual jargon. Too bad – Craps is really a simple game to learn, and you can actually make money by playing smart. The ABC’s of Craps is for the beginning gambler who wants to learn how to play this classic casino game, and play it well. More
Walk into any casino, and there is one section where the action is fast and furious. Players are whooping it up, and it sounds like one big party. You approach the area, and, squeezing through the crowd, you discover a long green felted table with a myriad of complex, confusing symbols. You hear voices, but while you can recognize the words, it seems they are in language you’ve never heard before – at least, you have no idea what they mean: “Eighter from Decatur,” “Six and one and you’re all done,” “It’s Little Joe,” and “Seven's a bruiser, the front line's a loser.”

Does baby need a new pair of shoes? Of course, because you’re at a Craps Table, the most fun you can have in a casino.

So many people pass this game by because of the perceived complexity and the unusual jargon, but Craps is really a very simple game to learn, and better yet – you can actually make some decent money by playing smart. And that’s what this book is all about.

Yes, Craps is a game of chance, but the edge the casino has on many of the bets you’ll want to make are very small. A hot streak or two, and you can make some serious “spondulicks” Y’know, “Benjamins…Moolah.” Money.

The ABC’s of Craps is designed for the beginning gambler who wants to learn how to play this classic casino game, and play it well.

Mike Exinger is a 21st Century Renaissance man...that's what he says, while others would say, “Cripes, he's had a lot of jobs.” Born in Ann Arbor, MI during the Truman administration, he's been a Banker, Radio DJ, University Professor, Freelance Writer, Jewelry Artist, and an Ice Cream Guy (that was his first job and his current one 40+ years later). He currently resides about 500 yards from the Pacific Ocean in Seaside, OR.

You have subscribed to alerts for Mike Exinger.

You have been added to Mike Exinger's favorite list.

You can also sign-up to receive email notifications whenever Mike Exinger releases a new book.