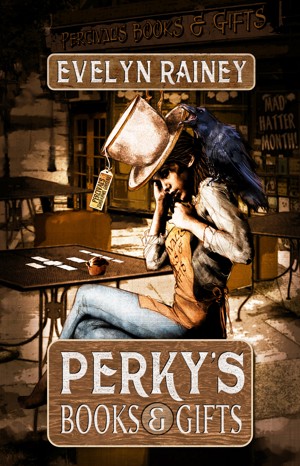 By Evelyn Rainey
Perky's Books & Gifts…a place where you can find murder, mystery, love, monsters, demons and giant festive hats. All of that, and books too! More
Welcome to Perky's Books & Gifts where gardening books blossom into bouquets, cookbooks sizzle with succulent juices, and military history books can be lethal. Don't mind the mutilated body behind the werewolf display, or the fact that the café manager is an egregore; Frankenstein was one, too.

The story of Perky's Books and Gifts begins with murder and ends with true love. It is told by Madison, Perky's Night Manager. She must band with her quirky (maybe just plain crazy) staff to figure out just what is making the books spring to life terrorizing the store and its customers. Does it have something to do with the new café worker, the possible new tribe of owners, the no-nonsense Colonel or the mysterious lady who just suddenly appears at a café table only to disappear just as suddenly with only a feather remaining?

Evelyn Rainey lives very quietly in a small southern town with her dog, two cats, and thousands of home-grown tadpoles and frogs (don't ask). She spends her time in this incarnation teaching, writing, and belly dancing. Her online presence includes:

Perky’s Books & Gifts is her third novel and began to take form while she worked at Books-a-Million for six years as a part-time paperback specialist and Red Badge. She has also been published in anthologies, magazines, columns, and newspapers.
She facilitates Writers for All Seasons. She has been an educator for thirty-one years. Outside of the school system, she is an ordained elder in the Presbyterian USA Church, an herbalist, a singer, belly-dancer and she loves to do book-signings.

You have subscribed to alerts for Evelyn Rainey.

You have been added to Evelyn Rainey's favorite list.

You can also sign-up to receive email notifications whenever Evelyn Rainey releases a new book.