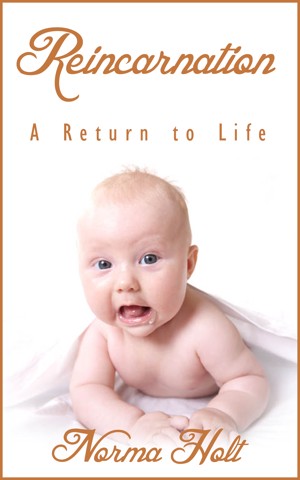 Reincarnation - A Return to Life

By Norma Holt
Rated 1.00/5 based on 1 reviews
Norma suspects that everyone who has lived is back in their bodies at this time. If, like her they have reincarnated, it would explain the overpopulation that is obvious. Her experience provides information about what happens after death. The spiritual insight gained overrides religious views of heaven, hell, devil, angels and saints and explains the confusion about God that many feel. More
Norma claims that we live in a time of great uncertainty and most realise that time is running out. Overpopulation is out of control and the world cannot sustain the numbers alive today without collapse of all resources. So why are we here? What is going on? Who is in control? Why doesn't God stop the carnage and answer the pleas for help.

She has studied Old Testament prophecies that told of this time and it is noted therein that everyone will be reincarnated for judgment. That is completely different to what religious organisations are promoting. They encourage people to believe in myths to maintain power and control. Few, however, understand how and why the good will be redeemed in the Spirit or who they are while others are destined to go elsewhere.

Promises for this time include the building of Mount Zion where all things will be put right. It is happening now and the spiritual will have a chance to prove themselves. While this sounds strange to those who are religiously 'tuned in' this is the time to reflect on what is happening now compared to the prophecies.

The deafness created by false promises and religious window dressing keeps many in the dark. This book aims to shine light into their world as it provides thought provoking evidence backed up by prophecies that cannot be disputed.

The Spirit promised that a woman, the Daughter of Zion, will unravel the mysteries and will have the power to break down the barriers between God and the Children of the Spirit. This work introduces her and reveals how she was led led to be the new teacher for the end of days. Most would never have heard of her because she is one of the Spirit's secrets.

Everything she is doing was forecast in Prophecies. Her work is going forth over the Internet to build the mountain of God. She makes no apologies for what she reveals or for who will be included in the harvest. This is part of the big picture and the plan that of God from the beginning. She is the messenger and the Spirit is the judge. Her commission is to return the lost to their spiritual link.

Despite its misleading title, this book is not about reincarnation. The author spends most of the book criticizing all religions, including religions she obviously knows nothing about. For example, she blames an Asian tsunami on “false religions” and their worship of idols. Pat Robertson would be proud of her!

One of the religions she mentions as worshiping idols is Buddhism. Anybody who knows anything about Buddhism knows that Buddhists do not worship anyone or anything, let alone idols.

The weirdness of this book starts right in the first chapter where she talks about her own ideas about the meaning of different words based on her own “linguistic research,” for which she cites no sources and which makes anyone who knows anything about linguistics shake their heads.

The more the book progresses, the more she claims she was chosen by the Spirit to be a prophet and to teach the world the truth. What that truth is, she doesn’t say, she just refers the reader to her as-yet-unspecified next book.

She claims she has performed miraculous healings. She takes credit for an old woman being saved from a land slide somewhere in South America, because she had prayed for her two days earlier back home in Australia without even knowing about her or the land slide.

She claims to be communicating directly with the Spirit, whose voice she hears physically through her ears; has had numerous visions, and has been directly appointed a teacher by Jesus. But not Jesus Christ, whose existence she denies, the other Jesus, “the ancient name of god!” LOL.

She is puzzled why some of us are tall, others short; why some are white and some are black; why some are male and some female. Gosh, has she ever heard of DNA, let alone the X and Y chromosomes?

I won’t pity anyone who may fall for it and join her cult. Though I will pity their innocent children who will be brainwashed by her sense of self-entitlement and her hallucinations.

You have subscribed to alerts for Norma Holt.

You have been added to Norma Holt's favorite list.

You can also sign-up to receive email notifications whenever Norma Holt releases a new book.