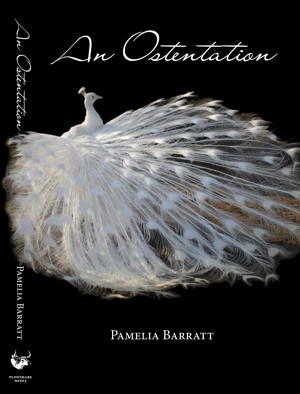 Mysteries and secrets are embedded within the family tree and concealed by the pride of consecutive generations. Tensions created by the divisions of class and ethnicity set the stage for a compelling love story during the transformative years of a great city, woven into a murder mystery intimately entwined with Chicago's development.

Pamelia Barratt has lived on both the east and west coasts of the United States. She grew up in Chicago, summered in Wisconsin, lived for extended periods of time in Switzerland and Britain, and volunteered for ten years with a development nonprofit that works in the high Andes of Bolivia. After a career as a high school chemistry teacher, she became a journalist in San Diego, and then discovered the thrill of writing fiction. Her first novel, "Blood: the Color of Cranberries", was published in 2009. It was followed by "An Ostentation" two years later. "Gray Dominion" is her third mystery.

“My hodgepodge background has offered a great source of characters and situations to draw on for storytelling. Birds and nature continually renew my spirits,” Pamelia says. It’s no wonder that creatures of the wild assume important roles in her stories.

You have subscribed to alerts for Pamelia Barratt.

You have been added to Pamelia Barratt's favorite list.

You can also sign-up to receive email notifications whenever Pamelia Barratt releases a new book.