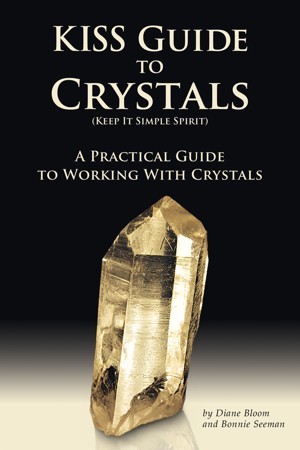 The KISS Guide To Crystals

Using this book will give you a simple yet comprehensive focus for whatever uses you wish to pursue. Unlock the mysteries inside the crystals and open yourself up to a new way of seeing and experiencing the world. Bonnie and Diane’s combined expertise led them to design a “Keep it Simple” book for crystal layouts that will forever change how you work with crystals.

Diane had her “cosmic wake-up call” in 1990 after being hit in the face by a line drive when playing softball. After a year of Western medical procedures which did not heal her injured arm, she was led to crystal healing and in five weeks her arm was healed. This transformative experience led her to train with some of the most gifted healers in the world and spurred her to open her own crystal business.

Diane has studied with Katrina Raphaell, Melody and DaEl Walker. She became a teacher in The Association of Melody Crystal Healers International. She is a graduate of The School For Enlightenment and Healing and the Lionheart Institute of Transpersonal Energy Healing. She now expertly runs her own school – the Free Spirit School of Integrated Energy Healing (www.freespiritschool.com).

Diane teaches crystal and stone healing and uses the techniques she teaches in her weekly healing practice. Her healing is highly sought-after and has deeply transformative effects for her clients. She is a Reiki Master/Teacher and also enjoys practicing the fine art of numerology. Diane's expertise in the crystal & energy healing world comes from over 20 years of experience as a practiced healer, with hundreds of transformed students and clients, and through her own personal spiritual journey.

Bonnie is a “wanderer”. Ten years prior to writing the “KISS Guide to Crystals”, she had traveled the world experiencing the many diverse religions, traditions and cultures in the far corner of Mother Earth. In 1994, her world changed forever. Bonnie and her husband, Dr. Marvin Seeman, traveled to Brazil where they purchased literally tons of Brazilian minerals, mostly quartz. Her spiritual path was awakened through working with the crystals. Over the many years that followed, Bonnie had the privilege of sorting and identifying thousands of crystals. As we began to enter the new Millennium, a new generation of quartz crystals began appearing. Hence, that is part of the reason behind another crystal book. It is thus the purpose of this book to identify and inform the reader as to the application of these crystals in their lives.

For many years, Bonnie and Dr. Marv owned Crystal Keepers and traveled across American doing gem and mineral club and trade shows. They brought crystal awareness to the masses with a wonderful selection on minerals and especially identified quartz crystals to be used as healing tools. Thus, there arose another reason for the writing of this book. Bonnie had many requests for an easy to assimilate metaphysical information on crystals and their uses.

Bonnie and Diane first met in Quartzsite, Arizona. Diane came to “Crystal Keepers” to purchase crystals for “Free Spirit Crystals”. In due time, they became friends. And there in lies the third reason for the writing yet another crystal book – because they were “told” to write a book.
Spirit imparted a request to write a book to simplify the use of crystals as healing tools.

Today, Bonnie and Dr. Marv reside in Ecuador. Their life mission has been to impart information to others. They have a facility where people may come and experience life differently. They run seminars to teach people how to heal themselves and others. They want people to step out of the “synthetic world” – “the illusion” and into a world of who they really are and why they are here in this space in time.

Beautifully written and well researched. Tons of practical and spiritual insights and wisdom here. Written by awakened women for us all to embrace healing and empowerment. A great reference book for all.
Thank you! I look forward to your next book!
Iris Barratt author of The Oneness Process

You have subscribed to alerts for Diane Bloom.

You have been added to Diane Bloom's favorite list.

You can also sign-up to receive email notifications whenever Diane Bloom releases a new book.