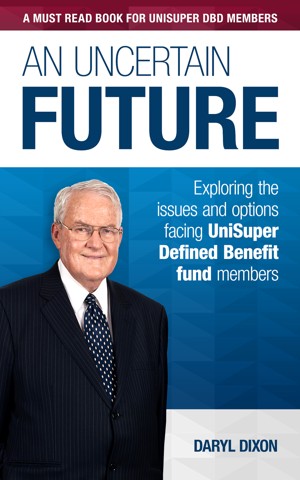 Daryl argues that the fund, the default super fund for all new full-time university employees, is putting members’ retirement benefits at risk by failing to provide a guarantee to pay promised benefits. He also shows how the UniSuper DBD favours older employees.

Ahead of changes to be implemented from 1 January 2015, which will result in a significant reduction in the accrual of benefits, Daryl considers a number of options for UniSuper DBD members.

Complete with case studies and calculations never before made public, this is a must-read book for every UniSuper DBD member.

Daryl Dixon is the Executive Chairman of Dixon Advisory and Superannuation Services. Daryl is one of Australia’s foremost investment experts and a well known writer and consultant. He has provided trusted advice to thousands of personal clients over more than 25 years and is an acknowledged expert in the areas of tax, superannuation (including public sector superannuation), social security and investments. He has been a successful investor for more than 40 years and consults on personal and business finance strategies.

Daryl is the author of numerous newspaper articles on investment and superannuation and writes regularly for The Canberra Times, the Public Sector Informant and Financial Review Smart Investor magazine. He has written a number of books, including Secure Your Superannuation Future (published in 2012). Read more about Daryl's books.

Before establishing his own consulting firm, Daryl worked in the International Monetary Fund, the Treasury, the Department of Finance and as Head of the former Social Welfare Policy Secretariat on major policy issues. He has worked as a consultant for a variety of government bodies and undertaken a large number of consultancies for diverse organisations covering the public, private and voluntary not-for-profit sections of the economy.

You have subscribed to alerts for Daryl Dixon.

You have been added to Daryl Dixon's favorite list.

You can also sign-up to receive email notifications whenever Daryl Dixon releases a new book.