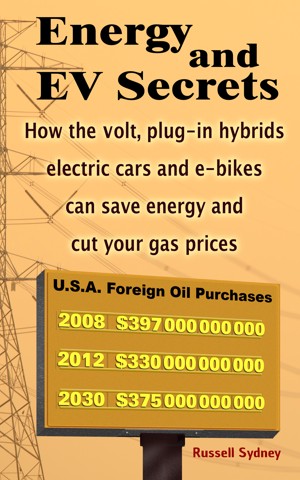 Energy and EV Secrets: How the volt, plug-in hybrids, electric cars and e-bikes can save energy and cut your gas prices

By Russell Sydney
Energy and EV Secrets lays out the pressing energy concerns and shows the way to the EV Solution; pressing concerns like your bank account and how imported oil threatens national security, the economy, and good jobs. It shows that the EV Mindset can let you fight high gas prices and get past all the big obstacles to driving electric cars and plug-in vehicles of all kinds. More
Rising Gas Prices… Global & Local Concerns… Inside this book, discover why it’s time to consider the Electric Vehicle Solution

Energy and EV Secrets shows why Energy and Oil Dependence will be defining concerns for decades. It clearly identifies the links between oil, national security, the economy, good jobs and our individual bank accounts. It even establishes a clear connection between imported oil and the Great Recession. It does all this with engaging language and graphics based on the known facts that delivers the message with style.

The reader will learn:
* Why Oil Dependence Problems are important to you and your country
* Why our National Security is becoming at risk from huge expenses to protect global supplies
* The details of the Pending Global Competition for Oil
* How plug-in hybrids like the volt and electric cars like the LEAF keep money in Local Economies
* 7 Energy Secrets that achieve personal energy security and save energy

The EV Solution presented is clearly a viable way to handle the oil dependence concerns. The Solution shows how a variety of electric vehicles can free millions of people from draining their bank accounts for fuel. The EV Solution has something for every pocketbook.

The information includes:
* How to drive 3,000+ Miles on One Tank of Gas with a Chevy Volt!
* 7 ideas that keep people in Internal Combustion Engine (ICE) Thinking
* 3 key ideas that will take a reader out of the ICE Age and into the EV Mindset
* 19 ways plug-in hybrids, electric cars and e-bikes bring Smiles to their drivers
* How to beat High Gas Prices with the EV Solution

The book accumulates EV knowledge from many experts and pioneers as well as the author’s first-hand experience. It covers a full range of electric vehicle options, including the Volt, plug-in hybrids, and electric cars like the Nissan LEAF and the Tesla — along with e-bikes and everything in between.

When people realize how the EV Mindset can save energy costs and help fight high gas prices, they will wonder why it took so long to become part of the EV Solution.

Russell Sydney is uniquely qualified to write about the burgeoning use of electric cars, plug-in hybrids and e-bikes – the Electric Vehicle (EV) Solution.

Russell is a seasoned and experienced writer and international seminar leader. He has a gift for turning technical information about things like electric cars into readily usable and understandable language. He has been the Editor and Principle Writer for the Sustainable Transport Club Newsletter since 2004. He is the author of the best-selling Bust the Y2K Bug and A History of the Farmers Markets Movement in California.

His professional career has included rising to the top of the training field. Russell has trained people on technology throughout the United States, all across Canada, around the U.K., and down into the Caribbean. This work helped over 300 companies adopt new technologies and over 8,000 people with various aspects of business and computerization.

Russell Sydney also helped create one of the leading Electric Vehicle Areas in the U.S. This EV Area stretches from Long Beach to Santa Monica and up to Santa Barbara. It has one of the highest concentrations of electric cars, plug-in hybrids and e-bikes in the U.S. He has worked with many of the top EV leaders and developers as well as hundreds of electric car drivers and e-bike riders around the country. He is communicating their knowledge about handling high gas prices and how to save energy. In addition, he is communicating his own personal experiences with EVs. He is a Chevy Volt driver and has been driving and testing all sorts of electric cars and e-bikes since 2003.

Russell Sydney has a Master’s Degree in International Development from UC Davis.

You have subscribed to alerts for Russell Sydney.

You have been added to Russell Sydney's favorite list.

You can also sign-up to receive email notifications whenever Russell Sydney releases a new book.