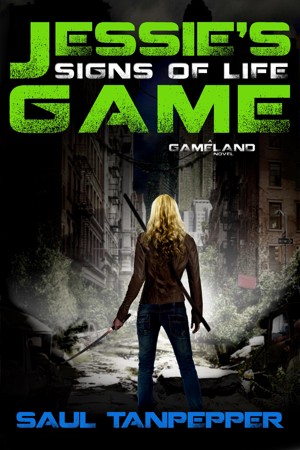 By Saul Tanpepper
As the world teeters on the brink of an apocalypse, the source, Arc Enterprises, introduces a new twist on their most popular product, THE GAME, where live Operators control zombies in an abandoned Long Island arcade. But when a network lapse threatens an outbreak in her hometown, gamer Jessica Daniels must stop a hacker before someone she loves dies. More
The water pelts her upturned eyes, yet she does not blink. It pools into the hollows beneath and around the blackened orbs until the solid gray of the sky bursts into brilliant prisms of color, vibrant lakes and oceans of molten light. And if she blinks, it spills out in a kaleidoscope of tears.
If she could only blink.
The water turns the darkness away from this dead, empty world and makes it bright once more.
Yes, the rain is good. The rain is as close to life as she can come.

HER BLOOD HOLDS HUMANITY’S SALVATION. HER HEAD, THE MEANS TO DESTROY IT.

As the world teeters on the brink of a technological and biomedical apocalypse, the one entity with the power to intervene, Arc Enterprises, chooses to ignore the warning signs and instead pushes forward with a new twist on their most popular product, THE GAME, where Operators control reanimated Players in a live action virtual reality arcade on abandoned Long Island. After a network lapse threatens an outbreak in her hometown, gamer Jessica Daniels stumbles on a plot to hijack the implants of the living. Now she must stop the hacker before someone she loves dies.

Books 1 and 2 are available for free:
Book 1: Deep Into the Game
Book 2: Failsafe
Or get the 1+2 package for free

Everyone loves SURVIVALIST, a live-action, virtual reality show based on Arc Entertainment's THE GAME, where cybernetically controlled zombies do battle in a video arcade in the middle of a Long Island wasteland. It's to die for.
If you're rich enough, you can buy your way in. If you're desperate enough, you can volunteer to become one of the Undead Players. Jessie Daniels and her gang of computer hackers plan to break their way in.
Welcome to GAMELAND. Access Restricted.

For insight into the world of GAMELAND, including how it all started, check out the short story GOLGOTHA, available individually in digital format as well as in the short story collection SHORTING THE UNDEAD AND OTHER HORRORS, by the same author.

INFECTED: HACKED FILES FROM THE GAMELAND ARCHIVE. Includes a timeline of key events, a glossary of terms, character dossiers, essays, articles and never-before-released voice transcripts from the GOLGOTHA recordings.

VELVETEEN: The story of Cassie, a six-year-old girl-turned-zombie, who has been trapped in a bathroom... until her inadvertent release twelve years later (by Jessie in Episode 4 of GAMELAND). Cassie has something she needs to do, something she's been thinking about for a long, long time. A terrifying twist on a classic children's tale.

Saul spent his formative years in a creaky century-old house overlooking the Erie Canal in Upstate New York. His bedroom was a refurbished attic, which he shared with all manner of creatures, not all, he is convinced, flesh and blood.

After bouncing around the US and Europe, he settled down to pursue a career in the sciences, opting to study the mysteries of human molecular genetics. But even positions as an experimental biologist, teacher, manager and biotech entrepreneur could keep him from his true love: literature.

eFiction magazine calls Saul a writer armed with "a PhD and a whacked out sense of humor." He now writes speculative fiction full time from his attic-less home in the San Francisco Bay Area, which he shares with his wife, kids, four dogs, three cats, six chickens and the occasional possum.

You have subscribed to alerts for Saul Tanpepper.

You have been added to Saul Tanpepper's favorite list.

You can also sign-up to receive email notifications whenever Saul Tanpepper releases a new book.