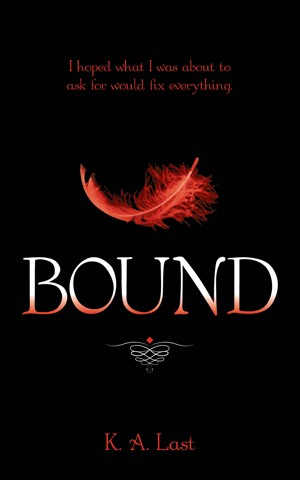 By K. A. Last
Bound is a 3,000 word bonus scene and takes place towards the end of Sacrifice. More
Seth would do anything to win back Grace’s love and trust.

When he makes a deal with Michael, the archangel who banished him to life on earth, he hopes it will fix everything. But can Grace’s broken heart be mended that easily, or will Seth’s request end up haunting him for eternity?
Download: epub mobi (Kindle) pdf more Online Reader
rtf lrf pdb txt
Price: Free! USD
Add to Library
Create Widget
Tags: romance vampires angels paranormal romance young adult ya fall for me k a last the tate chronicles
About K. A. Last

K. A. Last was born in Subiaco, Western Australia, and moved to Sydney with her parents and older brother when she was eight. Artistic and creative by nature, she studied Graphic Design and graduated with an Advanced Diploma. After marrying her high school sweetheart, she concentrated on her career before settling into family life. Blessed with a vivid imagination, she began writing to let off creative steam, and fell in love with it. She now resides in a peaceful leafy suburb north of Sydney with her husband, their two children, and a rabbit named Twitch.

Learn more about K. A. Last

Also in Series: The Tate Chronicles

You have subscribed to alerts for K. A. Last.

You have been added to K. A. Last's favorite list.

You can also sign-up to receive email notifications whenever K. A. Last releases a new book.