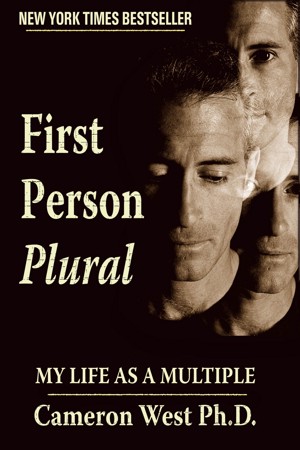 First Person Plural: My Life as a Multiple

By Cameron West
In this classic New York Times bestselling memoir, Cameron West tells the story of his struggle to come to terms with having multiple personalities. West, who earned a doctorate in psychology in the years following his diagnosis, offers a remarkably poignant account of his efforts to understand the workings of his fragmented mind. More
“What the hell is happening to me? I feel possessed. I’m talking gibberish in the mirror and somebody else’s voice is coming out of my mouth.”

Cameron West was in his thirties, a successful businessman, happily married and the father of a young son when he spoke these words. The “voice” he heard belonged to Davy, the first of twenty-four distinct alter personalities to emerge over a period of several months as West began to recall memories of horrific abuse he’d repressed since childhood. Along with Davy, there was eight-year-old Clay, tense and stuttering, twelve-year-old Dusty, gentle and kind, but disappointed to find herself in a man’s body, Bart, lighthearted with a sense of humor, Lief, focused and driven, who got things done, but often overwhelmed West with his intensity, and nineteen other personalities, all with distinct characteristics, mannerisms, and memories, created by West to protect his psyche from the trauma of repeated sexual abuse at the hands of family members.

In the classic New York Times Bestseller, First Person Plural, West offers a poignant account of his efforts to understand the workings of his fragmented mind and to heal his damage spirit as he desperately hangs on to the slender thread that connects him to his wife, Rikki, his son Kyle, and some semblance of a regular life.

In addition to a spellbinding story, West provides rare and unprecedented insight into the fascinating condition known as Dissociative Identity Disorder, the working of the mind of a multiple, and his alters’ coexistence with one another and with the world “outside.” Heartwrenching, humorous, and ultimately hopeful, First Person Plural is a story that will make you stand in awe of the power of the mind to protect itself and cheer for West as he struggles to gain control of his life.

“A page-turning journey through hell.” Entertainment Weekly
“For those who found Sybil or The Three Faces of Eve believable and engrossing, this account will be even more so.” Kirkus Reviews
“First Person Plural is an honest, courageous account that demystifies the lives of those who struggle with Dissociative Identity Disorder.” Ellen Bass author of The Courage to Heal
“First Person Plural is an incredibly important book. It is a testament to the resiliency of the human spirit.” Marlene E. Hunter, MD, FCFP, President International Society for the Study of Dissociation

CAMERON WEST was born in Chicago, Illinois. He attended Berklee School of Music and Syracuse University and received his undergraduate degree in business and music from the State University of New York. He met his future wife Rikki in 1978 in Boston where he was working as a touring musician and they married in 1981. In 1987 while living in Nashville, Tennessee, where Cam was working as a recording artist and Rikki was attending graduate school at Vanderbilt University, Rikki gave birth to their son Kai. Though Cam and Rikki had a strong relationship and a beautiful, healthy baby, Cam continued to suffer from a number of chronic illnesses that had plagued him since he was a teenager.

In 1988 he and Rikki made the decision to leave Nashville and the music business behind so Cam would be present while Kai was growing up. They settled in a suburb of New York City and Cam went into business in sales. Though his business thrived, his physical health declined, and following a fourth failed sinus surgery in ten years, he was diagnosed with systemic candidiasis and a severely compromised immune system. With Rikki's support and the help of a holistic medical practitioner, he was able to fight his way back to health over a period of almost a year.

When Cam was finally physically healthy, his psyche started to crumble and he began to show profound symptoms of dissociation. Rikki had worked with emotionally disturbed children and had been trained in counseling, and she recognized that Cam desperately needed the help of a mental health specialist. Cam was diagnosed with Dissociative Identity Disorder (formerly called Multiple Personality Disorder) in 1993. The Wests moved to California in 1994. In regular therapy with a specialist in dissociative disorders, Cam was accepted into the doctoral program in psychology at Saybrook University in San Francisco and he earned his Ph.D. in 1997. His dissertation was a case study of the experiential aspects of switching and co-consciousness in three persons with DID.

FIRST PERSON PLURAL: My Life as a Multiple (Hyperion, 1999) was Cam's first book. Oprah Winfrey took an interest in Cam and Rikki’s story and invited them to be on her television show for a full hour. This appearance was the first of many (including The Today Show with Katie Couric, 20/20, and Entertainment Tonight) for Cam and Rikki, and the book became a New York Times bestseller and was eventually published in twenty-two countries. Movie rights were purchased by Disney Studios, and a draft script was written by Eric Roth (Rainman, The Horse Whisperer), but the movie has yet to be made.

Cam wrote his second book, THE MEDICI DAGGER, (Simon & Schuster, 2001) a novel about an orphan named Reb who became a stuntman and was drawn into a search for his hero Leonardo Da Vinci's legendary Medici Dagger to avenge his parents' deaths. The story involved long lost pages from Leonardo's notebook, which resurfaced and offered clues to the dagger's hiding place. The book, published in over twenty countries, was optioned twice by Paramount Pictures for Tom Cruise, but has yet to be made into a film. Reb's adventures continue with the publication of Cam’s second novel, FUTURECARD.

You have subscribed to alerts for Cameron West.

You have been added to Cameron West's favorite list.

You can also sign-up to receive email notifications whenever Cameron West releases a new book.