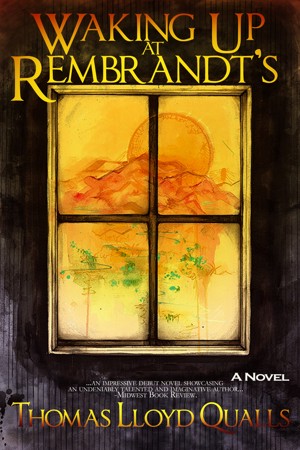 Waking Up At Rembrandt's

With a voice that is lyrical and immediate, she artfully trails her Ariadne thread to lead her devotees back into the light.

Waking Up at Rembrandt's is a fresh take on the tale of awakenings. It celebrates the sensual, as well as the spiritual, effortlessly bridging the two worlds.
Author Thomas Lloyd Qualls combines prose and poetry, fiction and spirituality, and dreams and reality in a manner that is at once unconventional and irresistible. Blending the epicurean delights of Peter Mayle, the travel adventures of Hemingway, the spiritual teachings of Krishnamurti, and the magical realism of Isabel Allende, Waking Up at Rembrandt's takes literary fiction into new territory.

"Reno novelist Thomas Lloyd Qualls is a psychonaut. His luminous debut novel, Waking Up at Rembrandt’s, strikes literary gold, mining the depths of his character’s complex interior landscapes through an unlikely amalgam of poetry, prose and spirituality... The immediacy evoked by [the author’s] use of second person narration acts as connective tissue binding the reader to the plot lines... reminiscent of David Foster Wallace..."
~Reno Passport

"Thomas Lloyd Qualls is a writer of great sensitivity, passion and spirituality. His first novel — Waking Up At Rembrandt's — is an exquisite blend of fiction and poetry. He brings his characters to life as he takes them out of Rembrandt's Café into the greater world, lets them have their adventures, then brings them back enlightened. He breaks all the rules, but makes it work. It's a good read; I heartily recommend it.”
~Carol Purroy, TV Producer/Host, AUTHOR! AUTHOR!

"Waking up at Rembrandt's is an artful weave of metaphysical storyline with poetry; of awakenings and raw themes. It is not to be missed."
~Elle Marie Garfield, children’s author / Owner, Integrated Balance Solutions

"Dipping a toe into this work is pretty much impossible; once you open it, you get drawn in and it doesn't let you go. The range of creative effort on display here is a bit breathtaking...a skilled writer with an appealing way with words. This story is well worth sharing."
-Writer's Digest

Thomas Lloyd Qualls is a writer, a condition that is apparently incurable. He lives in the high desert beauty of Northern Nevada, along with the children’s author Lynell Garfield and their son August. He is a former copywriter, a licensed attorney who has overturned two death sentences, and a one-time vagabond who regularly wandered the globe with a backpack and three changes of clothes.

Thomas is the author of two novels, the co-creator of several storytelling projects, and the former owner of a music festival. He is also a sometimes painter and a contributor of essays to Rebelle Society, Wild Heart Writers, and Reno Tahoe Tonight Magazine.

His second novel Painted Oxen was published April 02, 2019 by Homebound Publications. As of this submission, it has won four literary awards, including the 2018 Landmark Prize for Fiction and the award for Best New Fiction at the 2019 American Fiction Awards.

In writing, one of his goals is to bridge the worlds of literary and spiritual fiction. With all his creative projects, he works to build bridges between people and places and to encourage curiosity.

In spite of the words written here, it is good to remember that a human being is not static. To define something is to kill part of it. You can find out more about Thomas, his books, poetry, paintings, and other projects on his website. www.tlqonline.com. Or at any of the absurd number of social media profiles out there these days. Feel free to check them out whenever you like. Or better yet, just invite him out for coffee or beer. He loves a good conversation.

Reviews of Waking Up At Rembrandt's by Thomas Lloyd Qualls

You have subscribed to alerts for Thomas Lloyd Qualls.

You have been added to Thomas Lloyd Qualls's favorite list.

You can also sign-up to receive email notifications whenever Thomas Lloyd Qualls releases a new book.