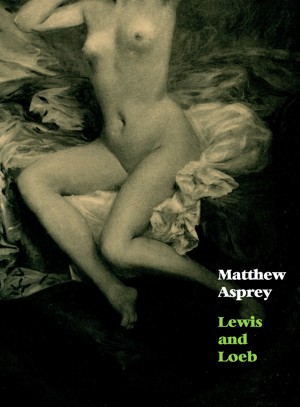 Lewis and Loeb (a novella)

The place is Tbilisi, crumbling capital of post-Soviet Georgia. Our expatriate Australian hero, author of 'magisterial novels of the ancient world', is in town to work as historical consultant on the sword-sandal-and-sex TV series Caledonian Blood. A thousand euros a week would not normally persuade Lewis to lend his good name to such trash; he'll only do it as a favour for his brother-in-law, a depressed and cuckolded Polish TV producer.

But when a pregnancy test threatens to cause havoc in Lewis's family-by-marriage, Lewis may need to rely on more than his Loeb Classical Library to hold the clan together...

MATTHEW ASPREY GEAR is an Australian writer. His book 'At The End of the Street in the Shadow: Orson Welles and the City' is now available from Wallflower Press/Columbia University Press.

He is one of the founding editors of Contrappasso Magazine. His work has appeared in the Los Angeles Review of Books, Senses of Cinema, Bright Lights Film Journal, Crime Factory, PopMatters, Island, Extempore, and Over My Dead Body! Many of his novellas are available in chapbook and ebook formats. In 2011 Matthew Asprey Gear graduated with a PhD in Media Studies at Macquarie University in Sydney. He has lectured on cinema and creative writing.

Some of his work is published under the name Matthew Asprey. It’s all his.

I downloaded this on a whim, just because it was free - now I'm taking the time to post a review because it's one of those books that makes you feel that you just have to spread the word, and pester your friends and relations until they read it and agree how brilliant it is. It's pretty short, but I lost count of the number of times I laughed out loud.