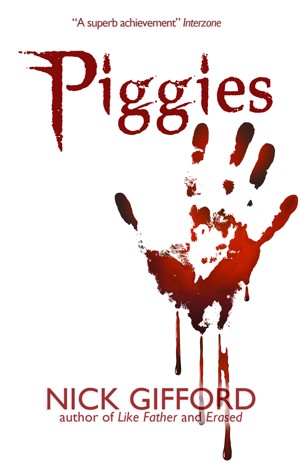 A freak storm transports Ben to a parallel world inhabited by vampires. He manages to escape to the woods where others like him (called ferals by the vampires) hide. As he begins to give up hope of ever getting home, Ben makes friends with Rachel, a vampire more human than some of the ferals who treat him with suspicion. Rachel takes Ben to her farm in an attempt to prove that she's not like the other vampires, but that's when he discovers a terrible secret. And why is the book called Piggies? That's the worst horror of all.

"Guaranteed to scare your socks off" Glasgow Herald

"The last sentence of Piggies is perfect. It makes you shudder when you first read it. Then you do a double take as you realise the full horrific implications" Atu XVIII Book Review Site

"A final twist that will chill your succulent red blood! A contemporary horror tale to sink your teeth into" Funday Times

"One of the most original horror tales of recent times ... you'll have to go back quite a way to find a debut novel that is quite as striking as Piggies" Rhyl and Prestatyn Journal

"A chilling read about vampires ... sure to make you squeal!" Sugar

"...a vampire story with some hectic twists ... This author really managed to freak me out. You'll see what I mean ... So enjoy - but you may want to sleep with the light on!" Sunday Times, South Africa

Nick Gifford is the bestselling author of Piggies, Flesh and Blood, Incubus and Erased, and he has been described by the Sunday Express as 'The king of children's horror'. His work has been optioned for movies and has featured on various bestseller lists, at one time out-ranking JK Rowling's Harry Potter books.

You have subscribed to alerts for Nick Gifford.

You have been added to Nick Gifford's favorite list.

You can also sign-up to receive email notifications whenever Nick Gifford releases a new book.