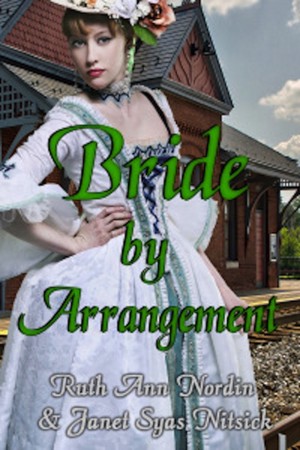 Ada Wilcox never thought her brother would answer a mail-order bride ad on her behalf. Worse, he's sold her--sight unseen--to a complete stranger. As she travels to Nebraska, she doesn't know whether to be angry with her brother or scared about the uncertain future looming before her.

Pete Kelly never thought he'd marry. Then one day his brother brings him a woman to marry, and the loneliness that plagued him for years in his quiet world is finally at an end. But the gift he was given might be quickly taken away if he doesn't act in time to keep it.

She Came by Train to a desolate land in the spring of 1876. With mixed feelings, Opal Preston steps onto the platform to meet her employer, Alexander Boyer. She accepts his hand and climbs into his wagon to begin her role as the governess of his two children. As she executes her duties, she wonders how she’ll cope without the finery she left behind. Soon two men are vying for her affections. Alex cannot imagine his life without her and looks for a way to convince her to stay in Nebraska. But a preacher from Virginia also is smitten with her and offers to take her back to Virginia. She Came by Train, but only her heart can determine if she’ll return that way.

Ruth Ann Nordin has written seventy romances, ranging from Regencies to historical westerns to contemporaries. She plays with other genres from time to time, but her first love is romance. She has been happily married for eighteen years to a sweet and funny guy, and they have four sons, who are all taller than Ruth now that they're 12, 13, 14, and 16. The good thing is she doesn't need a ladder, and there's always someone to take care of a mouse that squeezes its way into her Montana home. She considers herself very lucky to have led such a charmed life. Being able to play with characters and create stories is just icing on the cake. Hopefully, she'll get to keep doing this many years to come.

About the Series: Historical Romance Anthologies

Bride by Arrangement, A Groom's Promise

An enjoyable read! I particularly like the first story of Pete and Eliza because you can clearly see how sweet these two characters are. To add to Jutzie's review, the stories remind you how precious friendship, family, and love is. My only wish is that it was longer. This book will be a nice addition to anyone's digital library!

I loved both of these books but the purchased bride was my favorite of the two. Pete reminded me of John in Loving Eliza and his son Brian from bid for a bride. I loved how Ada stood up for Pete and helped him in the real world like Eliza did for John.
The second book was also good. I liked how it says that sometimes you have to give up someone you love for that person own good.
I liked how the two stories were connected and they became friends

Bride by Arrangement Anthology by Ruth Ann Nordin and Janet Syas Nitsick
Two women leave their homes in Virginia to travel the unknown. What and who will they find in Lincoln, Nebraska? One is to marry a stranger and the other is a governess. One has gone willingly, the other one has not. Two different backgrounds and yet this adventures builds a lasting friendship.

The Purchased Bride by Ruth Ann Nordin
Ada Wilcox is not happy. Her brother Sam has sold her to some man. She could be traveling to end up in a brothel somewhere in Nebraska for all she knows. Blessedly, she don't.

Pete Kelly is more than anyone thinks him to be. His brother just considers him childlike and unable to run his own life. No one sees how lonely he is.

Pete could rival John from Loving Eliza for my heart. Ruth really knows how to make a special hero. Loved this story.
**Sexual content within marriage

She Came by Train by Janet Syas Nitsick
Opal Preston did not want to leave her beloved Virginia. She loved the flowers and trees and just everything. It seemed best to take a governess job to lighten the load on her father. So she left her father, sister and brothers and headed to Lincoln, Nebraska.

Alexander Boyer owned a bank in Lincoln, a widower with two children. After the beautiful, but high society, governess comes to their home he wonders about his choice. And why he seems to be whistling and smiling more. Or why he feels the need to have their butler deliver fresh flowers to her room every morning after the handsome traveling minister comes to town.

I enjoyed both of these stories. Had to wipe my eyes a wee bit for both of them. Especially when a decision is made that means loving someone is to do what's best for them. Even to the point of letting them go.
Published by Parchment & Plume, LLC
http://justjudysjumbles.blogspot.com/2011/09/ruth-ann-nordin.html

I absolutely loved this book. It was so sweet and funny. I highly recommend it to anyone who likes heartwarming stories.