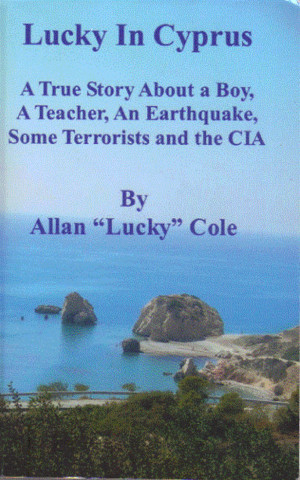 Lucky In Cyprus: A True Story ABout A Boy, A Teacher, An Earthquake, Some Terrorists And The CIA

Allan Cole is a best-selling author, screenwriter and former prize-winning newsman who brings a rich background in travel and personal experience to his imaginative work.
Son of a CIA operative, Cole was raised in the Middle East, Europe, and the Far East. He attended thirty-two schools and visited or lived in as many countries. He recalls hearing Othello for the first time as a child sitting on an ancient fortress wall in Cyprus - the island Shakespeare had in mind when he wrote the play.
Rejecting invitations to join the CIA, Cole became an award-winning investigative reporter and editor who dealt with everything from landmark murder cases to thieving government officials.
Since that time he’s concentrated on books and film. His novels include the landmark science fiction series, “Sten,” the highly-praised fantasy trilogy, “Tales Of The Timuras,” “The Far Kingdoms” series, a World Fantasy Award Finalist, and the Vietnam war classic, “A Reckoning For Kings.” The “Sten” novels, which he coauthored with the late Chris Bunch, have sold upwards of 25 million books worldwide and have been published in 13 languages.
His latest novels include “The Lords Of Terror,” which he wrote with Russian fantasy master, Nick Perumov, as well as “MacGregor,” and “Drowned Hopes,” thrillers set in Boca Raton, Florida. “Lords” is the first and only novel written by American and Russian collaborators.
Allan has sold more than a hundred and fifty television dramas, ranging from “Quincy” and “The Rockford Files” to and “Walker, Texas Ranger.”
He lives in Boca Raton, Florida, with his wife, Kathryn. For more information see his homepage at www.acole.com and his film and entry at IMDB.com

If you ever wanted to learn about Cyprus during the 1950s before Cypriot independence and before inter-communal conflict tore the island apart, then read this first hand account from Allan Cole. This story reads as a memoir, but what makes it interesting is Cole's amazing detail. The characters are real and so is the landscape as Cole describes it.

The author could have benefitted from some careful editing as there were a few errors here and there, but none of them were terribly distracting. I would read another book by Allan Cole because I think he's clever and honest.

You have subscribed to alerts for Allan Cole.

You have been added to Allan Cole's favorite list.

You can also sign-up to receive email notifications whenever Allan Cole releases a new book.