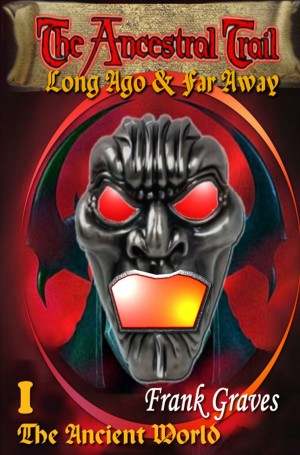 The Ancestral Trail - Long Ago & Far Away

The Ancestral Trail was first published in beautifully pictured set of magazine format in 1993. (The complete readable history on the same stories and also shows those fantastic drawings – Google theancestraltrail.com).
The three books in the trilogy are:-
1) Long Ago & Far Away (Ancient World)
2) New Time & Time Again (Cyber World)
3) Once Upon a Time & Time Again (Today World)

The Ancestral Trail Trilogy is the proper book of the first set of stories in a three-book format now being published. It tells the story of a boy that is suddenly plucked from his home world and sent to a new place, known as the Ancestral World. There, he learns that he is The Chosen One, appointed to save this world of mythical beasts from a great evil being known simply as The Evil One. A pig-like soldier and an intellectual waif-like female scribe throughout the journey ably accompany the boy to the first of three totally different worlds, the Ancient World, Cyber World and Modern Day World of Today

Said Evil One has already conquered the Ancestral World by stealing six pods from the “Tree Of Life” and imprisoning six Ancestral Guardians.

Since the beginning of time, creatures of the air, land and water have lived in peace in the Ancestral World. Landsmen, common beasts, birds and fishes have dwelt in harmony with insects, reptiles and mythical beasts. Ruled with fairness and wisdom by the Council of Guardians, they have known neither suffering nor the ravages of war.

Now an evil spirit has come to this land and is laying waste to all that is good. The Forces of Evil have gained ground fast and many of these peaceful creatures have been killed or have fallen under the Evil One's power. The Life Force of the Ancestral World is almost at an end.

About Ancestral Trail's Author
Frank Graves is an author and film producer raised in South Africa and is the great grandson of Sir Thomas Maclear named as one of the foremost royal astronomers at the Cape of Good Hope. He is also distantly related to Robert Graves the renowned writer and poet who was a large inspiration for Frank to eventually take up writing. Robert Graves encouraged Frank to start writing with several correspondence letters and stories while still a boy at school.

His first published work was published in 1989 was a fictional political thriller named African Chess (Now revamped, updated and republished in March 2014). African Chess was loosely based on his South African upbringing and the then apartheid system in place before Nelson Mandela's release from prison or his death.

His next major work published by Marshall Cavendish in 1992 was an epic 832 page publication; 'The Ancestral Trail Partwork' was 'split' into two halves of 26 issues each, making a total of 52 issues in total, all contained consecutive page and issue numbers. The first half, published fortnightly throughout 1993, takes place within a mythological 'Ancestral World'; that describes a boy';s struggle to restore good to these worlds. After the initial international run that sold over 30 million copies worldwide, the second half of that series was then created and was published in 1994 and took place in the totally different 'Cyber Dimension'; all about the same boy's attempt to find a way back to his own world.

Graves is now updating and re-writing the full 'Ancestral Trail Trilogy' in the form of three major epic novels. In January 2014, the first section covering a journey through an 'Ancient World'; within 'The Ancestral Trail Trilogy'; named 'Long Ago & Far Away'; in a 450 page novel was published. The second continuing section of the trilogy called 'New Time & Time Again' covers the 'Cyber World'; published November 2014 and the third section of the trilogy, 'Once Upon a Time & Time Again' covering our 'Exponential World' was published in mid 2017. (See the website at the ancestral trail.com for further detail on each chapter and the YouTube Video promotion)

'African Chess' by Frank Graves is a newly updated and revamped conspiracy, adventure thriller originally published in 1990. Recent events in South Africa such as Nelson Mandela's Death, Oscar Pistorius's Trial, Shrien Dewani' Extradition for Murder, 16,259 Murders in 2012/13 and Epidemic Corruption have all helped to heighten attention and draw in a lot of focus on that country.

African Chess - The Story - Michael and Robert born at exactly same time and place at a remote hotel in one of South Africa's most beautiful regions are treated as equals until they grow up. Robert demands equality and falls foul of the dreaded South African police when he joins the African National Congress (ANC) as a freedom fighter. Both flee to England to escape and at Oxford Robert finds more racism. When the security chief Dirk tries to kill them, Robert is helped by his white brother Michael and beautiful cousin Sharon. Their family business empire gives him certain protection. He learns to wheel and deal on London's commodity markets and uses this financial strength to fight back at the apartheid system. African Chess is relentless suspense, with move upon counter move until final checkmate.

The Culling novel is his third published work during 2014 and the story is that Western Governments use scientific evidence that within a few years, their world faces disaster from uncontrolled population explosion; especially by burgeoning third-world countries probably creating extra desert regions to ruin the industrialized world. No government could openly admit that it intends killing tens of millions of unwanted people worldwide. A number of major international conglomerates collectively called 'The Affiliation' are enlisted to conceal this man-made earthquake programme without any awkward questions being raised... It is a human survival war!

The Newest Adult Work is The Kixing published in June 2015

Using hardened trained human fighters with lightweight gladiatorial designer Armour, these very private illegal bouts are always held amid sumptuous black-tie dinner events especially laid on for the extremely rich and titled. In every vicious contest, the loser always being smashed to a pulp, critically maimed or better still and mercifully ...killed in full view of the sophisticated audience and is known as 'THE KIXING' The reason for protection of this sport is the massive illegal gambling side with ensuing high stakes. There are never any other winners in commerce or sport when the conglomerate chairman promotes his beloved Kixing fights.

A major conglomerate attempts a hostile take-over of a small family company using dirty methods including professional and underhanded industrial espionage methods. However, the large group meets their match as the owners of the small firm that is Mafia connected resists the attempt. The chairman of the major group is also a well known boxing promoter, who when acquiring a bookmaking business using similar type tactics creates his own total undoing of his business empire.

The Ancestral Trail Trilogy
Since the beginning of time, creatures of the air, land and water have lived in peace in the Ancestral World. Landsmen, common beasts, birds and fishes have dwelt in harmony with insects, reptiles and mythical beasts. Now an evil spirit has come to this land and is laying waste to all that is good. 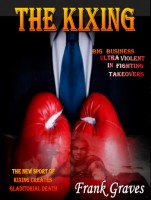 You have subscribed to alerts for Frank Graves.

You have been added to Frank Graves's favorite list.

You can also sign-up to receive email notifications whenever Frank Graves releases a new book.