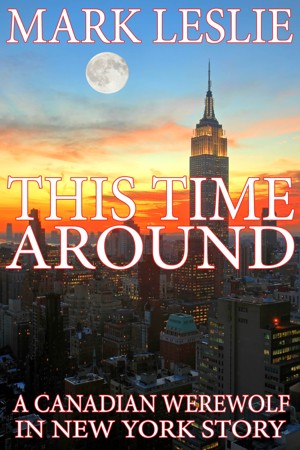 This Time Around: A Canadian Werewolf in New York Story

For Michael Andrews, a Canadian living in Manhattan and afflicted with lycanthropy, there are odd side effects to being a werewolf in the middle of a bustling metropolis.

Such as waking up naked in Battery Park with absolutely no memory of the night before as a wolf and trying to figure out why there is a bullet hole in his leg.

Just another day in the life of a man living with the odd side affect of his werewolf affliction.

Mark Leslie is a writer, editor and bookseller living in southern Ontario.

Mark's writing falls most closely into the "Twilight Zone" camp of fiction - he calls himself a horror writer but his tales include horror, elements of science fiction and fantasy.

You have subscribed to alerts for Mark Leslie.

You have been added to Mark Leslie's favorite list.

You can also sign-up to receive email notifications whenever Mark Leslie releases a new book.