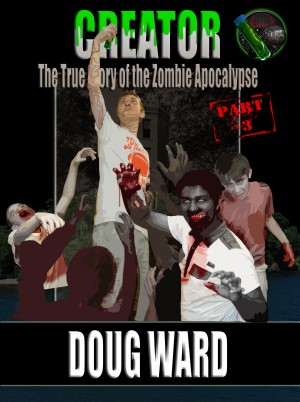 Creator; The True Story of the Zombie Apocalypse Part 3

This is the third book in the, "True Story of the Zombie Apocalypse" series. Although you could certainly read this as a stand-alone novel it would be much better if you read "Parasite" and "Symbiote" first. Please consider doing this. I refer back to the first book often. The book, "Saving Jebediah" is not a necessary read for this series. I wrote it as fan fiction for the wonderful author Mark Tufo. I do tie it in to the first and third book but it isn't necessary for the series.

The fourth book in the series is tentatively called "Predator; The True Story of the Zombie Apocalypse." It isn't available for purchase because the author currently is working on it. Check for updates on his Facebook page.

Doug Ward currently lives in Western Pennsylvania and is a graduate of Slippery Rock University. He has a BFA is in Fine Art and spends much of his time doing oil paintings, which incorporate mythology and science, and writing.

Doug's most recent series is "The War of the Stone." It is a fantasy series that introduces his world and the mythological beings who inhabit it. The first book is called, "Lich." If you like goblins, necromancers, and mayhem in general, this series is for you.

Of his first series, "The True Story of the Zombie Apocalypse, Doug Ward says, "I like to write about parasitic zombies. They feel (to me) more scientifically grounded than other types. It's also pretty scary how many parasitic creatures are inside of us at this very moment. Some have even bonded with us for so long that they are actually a part of our DNA."
Parasites have been known to take over their hosts. A few years ago my wife called me from a friends house and said that a mouse kept trying to snuggle with the cat. Actually nuzzling up to the cat's face. I quickly informed her that the mouse was infected by a parasite and that they needed to remove it from the house immediately.
The parasite wanted to be eaten by the cat so it could continue its lifecycle in the bowels of the unfortunate creature. This flatworm not only controls mice but it can infect humans as well."

"I have blended many scientific ideas into Parasite, which is a four book series.
Saving Jebediah is a fun piece of fan fiction I wrote for a contest Mark Tufo was having. It should be read as a prequel because the characters in Saving Jebediah turn up in the 4 book series."

If you want to get in touch, you can find him at dougward.space, tweet him @authordougward, check out his fan page at https://www.facebook.com/wardswoods/, or just send an e-mail to wardswoods@comcast.net.

Also in Series: The True Story of the Zombie Apocalypse

You have subscribed to alerts for Doug Ward.

You have been added to Doug Ward's favorite list.

You can also sign-up to receive email notifications whenever Doug Ward releases a new book.