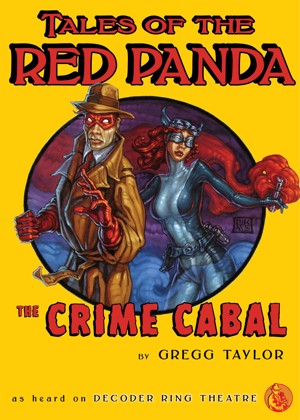 Tales of the Red Panda: The Crime Cabal

By Gregg Taylor
Rated 4.67/5 based on 3 reviews
Even the united remnants of Toronto's defeated underworld could not resist the city's masked protectors. But when they join with the murderous might of some of the masked man's deadliest foes, can even the Red Panda match the strength of... The Crime Cabal? All-new adventure and heroics in the style of the Golden Age of Pulp Fiction! More
Written in the breathless style of the classic "Hero Pulps" of the 1930s and 40s, Tales of the Red Panda: The Crime Cabal presents the masked protectors of Depression-Era Toronto in a pulse pounding conflict with gangsters, racketeers, corrupt officials and power-mad supervillains. The heroes from "The Red Panda Adventures"; a popular full-cast audio drama podcast in the style of the adventure programs of radio's golden age here make the leap into pulp prose in spectacular style.

This story is a self-contained adventure; you needn't have heard a single episode of Decoder Ring Theatre's long-running audio drama series to enjoy the thrills, mystery and adventure... but fans of the series will take special delight, as the story fits neatly within the series continuity. If you love classic adventure stories, mystery men, pulp fiction and golden age superheroics, you won't want to miss Tales of the Red Panda: The Crime Cabal!

Gregg Taylor's love of the classic adventure stories of the golden age of radio, comics and pulp fiction are the driving passions behind the "Tales of the Red Panda" series of books. The books began as a companion piece to his popular radio adventure series "The Red Panda Adventures", heard on independant radio stations around North America and around the world as part of the Decoder Ring Theatre podcast, and have gone on to reach new audiences who love the two-fisted adventure style that recalls the work of the legends of mystery and adventure. Like the classic Hero Pulps that inspired them, the Tales of the Red Panda books can be read in any order, with or without knowledge of the radio series.

Fantastic story! Very well told! I read the entire book in the voices from the podcast!

(reviewed the day of purchase)
Michael Dean reviewed on May 15, 2012

The first of Gregg Taylor's "Tales of the Red Panda" adventure novels is an impressive expansion of his Red Panda Universe. Taylor is terrific at telling these loving tributes to the heroes of Golden Age radio, pulps and comics.

In "The Crime Cabal" our heroes - the Red Panda and his sidekick the Flying Squirrel - must face the combined power of Kid Chaos and Professor Zombie as they unit the remainder of Toronto's criminal organizations.

If you enjoy the audio drama series, you will enjoy this book. If you've never heard the series, the first chapter alone will have you hooked. An excellent novel, about excellent characters, from an excellent author.

Life during the Depression ain’t easy, but the last toughs of Toronto’s criminal underground find themselves cornered when the boss got busted by those damn masked heroes. The terrific twosome of Toronto, the Red Panda and the Flying Squirrel, have been picking off the gangs one by one, and their survivors had enough.

“The Red Panda’s days are numbered!”

The remaining mobsters ally with supervillains and plan the greatest caper to defeat the Red Panda. While our courageous masked heroes have the powers of hypnotism, gliding membranes, and a dozen martial arts on their side–can they defend Toronto against the combined forces of the criminal underground, Kid Chaos’ explosives, and the Professor’s army of zombies? Can our heroes match the strength of… The Crime Cabal?

The Crime Cabal is a joy to read, and it reverberates with the energy of the Red Panda Adventures podcast series. The Squirrel is sassy and charming as ever, supporting characters such as Constable Parker are fleshed out, and snapshots into the lives of Toronto’s denizens provide colour to a thrilling old-school pulp adventure. The work especially shines in the fight scenes, which are fluid, fun, and fantastic–in all senses of the word.

Taylor has been writing scripts for Red Panda Adventures podcasts since 2005 in the style of 1930s and 1940s radio programs like The Shadow. The Crime Cabal is the first volume of three in the Tales of the Red Panda series. This book is well written, but Taylor’s heavy experience in writing scripts relative to writing prose shows in a few of the scenes. Some of the dialogue doesn’t quite capture that snappy, bantering rhythm that the characters should be having, and some of the emotions don’t carry through. The narration switches between points of view in the same scene, which is handled smoothly particularly with the villains, but is a distraction in others–especially in interactions between the two protagonists. I would prefer some scenes changed to third-person limited.

Considering that the Red Panda Adventures’ native medium is the radio show podcast, I recommend listening to a few episodes of the podcast first (they’re free) to get acquainted with the characters and the universe. If you find yourself listening to three, four, and more episodes… then the next step is to read this book and get deeper into the Pandaverse.

Overall, The Crime Cabal is great. It captures an effortless wit and playfulness in the spirit of Edgar Rice Burroughs. It’s not only a homage, but a realization of the pulp tradition–weaving together a fantastic universe of masked heroes that modern readers can immerse themselves in, both young and old alike. To my knowledge, the Red Panda series is the best in new pulp, and is at the forefront of pulp renewal. I’ll be reading the rest of the series and hope that Taylor continues to be a prolific prose writer, scriptwriter, actor, director, podcaster, et al. in the years to come… because I’ll be needin’ my Panda fix.

[For more reviews of fantastic and speculative literature, feel free to head over my blog. The link's in my profile :)]

You have subscribed to alerts for Gregg Taylor.

You have been added to Gregg Taylor's favorite list.

You can also sign-up to receive email notifications whenever Gregg Taylor releases a new book.