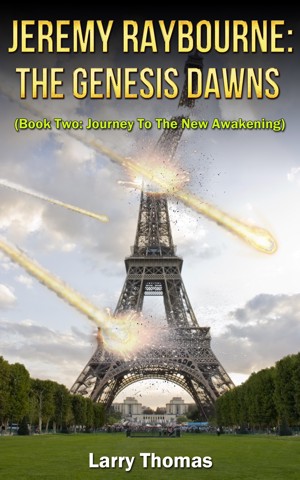 This fast-paced novel continues the journey as Jeremy Raybourne discovers his gene could be more useful then he was led to believe.

Will The Mystical Gene fully awaken in young Jeremy giving him the powers to overtake the evil Lord Malkeone or will Jeremy succumb to the pressures and fall his prey?

This is Book two in the Journey To The New Awakening Series.

My desire to become an author developed through the years as my own children grew.

We read books every night. When they were little I read to them. As they grew, and learned how to read, they read to me.

We congregated on the couch, or on one of their beds, and read stories together. It was fun, crazy, and sometimes frustrating. There were times when schedules made group reading difficult, but individual sessions were managed most nights.

During those years of family growth, I developed the desire to write my own books. Initially I thought about writing children’s books – and developed outlines for a couple of them. Jeremy Raybourne was one of those initial children’s books. But as my children grew and they began to read different genres, my desires changed, too.

The outline for the Jeremy Raybourne series was written over 20 years ago, but was put on the back burner due to time constraints created by my career and family responsibilities. Much has changed since the original outline. Technology is changing at light speed. Scientists are making new discoveries every day. When I picked up the project again, I had to re-think the concept and start from scratch. The new series is much better than the original idea.

Through the years I have enjoyed reading gay themed novels. Initially I read the typical romance – man meets man, falls in love, and lives through the conflicts that same sex couples faced. Then I discovered the gay themed suspense thriller and became hooked. I couldn’t get enough.

I started writing gay (male/male) themed novels, using my pen name John Charles and never looked back. I enjoy the romance aspect that only two men can have. I find developing a character that is passionate about his life and the life of his lover is a turn on to many readers as well as to me. So I try to develop that passion in my books and endeavor to make each character special.

The plots in my novels come from real life situations. I have always believed that real life is more interesting than anything a person could make up. So I listen, keep my eyes open, and let the world give me the ideas that make my stories believable and interesting.

You have subscribed to alerts for Larry Thomas.

You have been added to Larry Thomas's favorite list.

You can also sign-up to receive email notifications whenever Larry Thomas releases a new book.