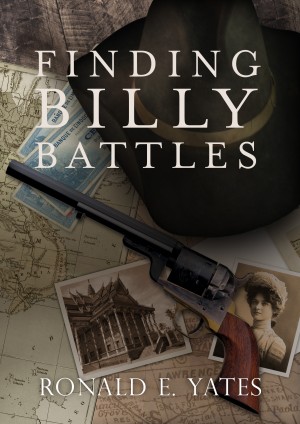 Finding Billy Battles: An Account of Peril, Transgression and Redemption

By Ronald E. Yates
Rated 3.00/5 based on 1 review
Finding Billy Battles is the saga of an extraordinary man's perilous and riveting journey from the untamed plains of 19th century Kansas to the mysterious Far East and elsewhere. More
Western Kansas 1860. Billy Battles is born on a remote homestead just off the storied Santa Fe Trail. More than one hundred years later a great-grandson inherits two trunks filled with Billy's personal effects. Also in those trunks are several startling journals that chronicle an astonishing life that until now was obscured by the murky haze of time and Billy's deep-rooted desire for secrecy.
The journals tell of a man both haunted and hunted who, in a desperate search for peace and redemption, journeys far from the untamed American West to the Far East, South America, and Europe. They meticulously describe Billy's interaction with a wide assortment of men and women--some legendary, a few iniquitous, and many lost to history. They also recount his participation in such cataclysmic events as the Spanish-American War, turmoil in French Indochina, and violent revolutions in Mexico and South America.
Complying with Billy's last request the great-grandson assembles the journals into a compelling trilogy that reveals a man often trapped and overwhelmed by circumstances beyond his control, but who nevertheless manages to persevere for ten decades.
Available ebook formats: epub mobi pdf rtf lrf pdb txt html
First 20% Sample: epub mobi (Kindle) lrf more Online Reader
pdb
Price: $5.99 USD
Buy Add to Library Give as a Gift
How gifting works
Create Widget
Tags: adventure action kansas author french indochina adventure abroad colorado setting historical 1880s adventure at sea arizona southwest adventure and survival
About Ronald E. Yates

Also in Series: Finding Billy Battles: An Account of Peril, Transgression and Redemption

Reviews of Finding Billy Battles: An Account of Peril, Transgression and Redemption by Ronald E. Yates

William Battles grew up fatherless in Lawrence, Kansas. At an early age he embarked on a career in journalism, which took him to Dodge City where he fell in with the likes of Wyatt Earp and Bat Masterson. A chance encounter with a family of desperados earned him the enmity of one Nate Bledsoe for the accidental killing of his mother. Bledsoe and his gang haunt Billy Battles with murderous intent. After marrying and having a daughter, Battles’ familial bliss is unsettled by the blood feud with Bledsoe, culminating in a shootout at the homestead at Battles Gap, Kansas. The aftermath and subsequent adversity drive the tortured Battles to escape his past by fleeing to the Orient.

This first installment of the life and times of Billy Battles, supposedly based on his own journals, is a first class tale of the late nineteenth century. The setting is convincing and clearly well researched. The historical characters speak in true to life voices and well-known events, such as the shootout at the OK Corral, are related with the verisimilitude of a firsthand account. The prose is also excellent as one would expect since the author tells us he is a professor of journalism. Therefore, this reader finds it baffling—nay, inconceivable—that the editorial style is so unorthodox. Having multiple speakers within the same paragraph caused much confusion. Mr. Yates must also hold a PhD in colloquialisms. Nowhere will you find more old-fashioned words and sayings as in Finding Billy Battles. Despite these peculiarities, it is quite a good story, although occasionally slowed by a slight excess of detail.

You have subscribed to Smashwords Alerts new release notifications for Ronald E. Yates.