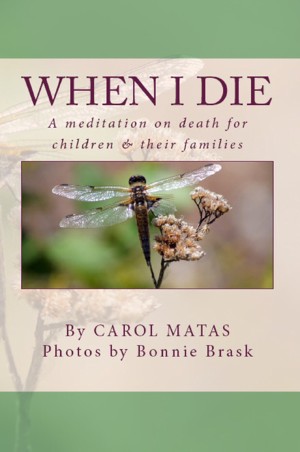 When I Die: A Meditation on Death for Children & Their Families

(N.B.: For optimal viewing of this picture book, set your text small enough on your Reader so that each photograph is bracketed with text on the top and bottom of the screen.)

How did YA Fiction Author Carol Matas Come to Write When I Die?

"The entire manuscript came to me all at once while I was meditating. I have changed it a little but it is almost exactly as I 'heard' it originally. I wasn’t thinking about anything in particular, my mind was rather blank, so I can’t explain why I thought of it or how it came to be. But I feel comforted by it in some strange way.

"The circle of life will go on with or without me. Some people tend to think they are the centre of the universe and all important. Others think they don’t matter at all and no one would care if they lived or if they died. I tend to think that there is a balance in almost everything. We are all the most important things in the universe- after all, Jewish thought says that if you save one life you have saved the entire world. And it is also true that the world will go on without us and that is a good thing. Everything is important or nothing is important. I believe everything is."

An internationally best-selling author of over 45 books for children and young adults, Carol Matas writes in all genres, from historical fiction to fantasy, science fiction to contemporary.

Carol’s books have been published all over the world in more than fifteen languages, garnering over a hundred awards and nominations. Tucson Jo, an historical novel for middle grades set in the Wild West, was a 2014 National Jewish Book Awards Finalist. Her other awards include a 2014 Sydney Taylor Honor Book Selection, a 2014 Canadian Jewish Book Award, the inaugural Silver Birch Award, the Geoffrey Bilsen Award for Historical Fiction for Young Readers, a New York Times Notable Book Award, as well as two nominations for Canada's prestigious Governor General’s Award.

Carol lives in Winnipeg, Canada, with her husband Per K. Brask, a theatre professor, dramaturge, translator, and poet.

You have subscribed to alerts for Carol Matas.

You have been added to Carol Matas's favorite list.

You can also sign-up to receive email notifications whenever Carol Matas releases a new book.