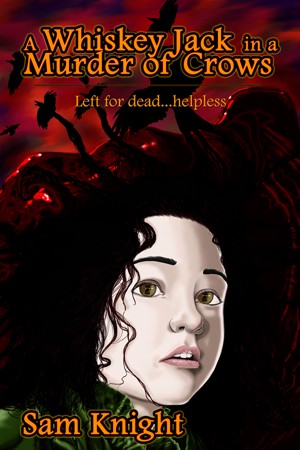 A Whiskey Jack in a Murder of Crows

By Sam Knight
Rainbow County California
Unrivaled sunsets, placid lakeside orchards, pleasant mountain vineyards, and a rural lifestyle.
The only thing stopping this place from being idyllic is the noise from the cars on the highway. And murder.
Jack is attempting to recover from tragedy, at a vineyard he inherited from his uncle.
It seems perfect, until the local barkeep confides Jack's uncle was murdered. More
Rainbow County California

The only thing stopping this place from being idyllic is the noise from the cars on the highway. And murder.

Left for dead, helpless as he watched the murder of his family, Jack is a broken man.

Six months later, Jack is attempting to recover, both in body and in soul, at a vineyard he inherited from his uncle.

California Wine Country seems like a good place to start over and escape the nightmares of his daughter's dying cries.

A Colorado native, Sam Knight spent ten years in California's wine country before returning to the Rockies. When asked if he misses California he gets a wistful look in his eyes and replies he misses the green mountains in the winter, but he is glad to be back home.
His grandfather and mother are avid readers and Sam says his own passion started when he pressed his grandfather to find out what was so interesting. His grandfather handed him a book and he has been an avid reader ever since. He claims to have finished the Hobbit and the Lord of the Rings trilogy in fourth grade and says he can still remember the look, feel, and smell of some of those early books. (He has been spotted sniffing books as he ruffles the pages.)
While doing research for a Western novel, Sam was not surprised to find out that, once upon a time, half of his family had been on the wrong side of the law. It stands to reason that when your great-great-grandfather was a marshal in Cripple Creek, Colorado, someone in the family had to be a horse thief. Sam was, however, surprised to find the family name had originally been McKnight and that the thieves had taken the 'Mc' part of the name with them. (Or the lawmen let them have it to distance themselves from that side of the family.) Having served a stint working in a correctional facility, he has often wondered if being a lawman runs in the blood. His great grandfather upheld the law in Mooreland, OK, as well as Springfield and Florence CO, among other places, with his grandfather occasionally deputized to assist.
When asked why he would want to become a writer, Sam recounts a time when he was in fifth grade. Illness stuck him in bed for two weeks with only books for companions. (This was a bit before video game phone implants were in common use.) He burned through the Xanth trilogy (back before it expanded into thirty some books), the Riddle of Stars trilogy, a couple of John Carter of Mars books, and several Pip and Flinx novels, relishing the moments when he would become so engrossed he would forget the ills of the physical. A thought floated through his mind at that time, about being able to return the favor to the authors who were providing so much to him. That thought never left and now he sincerely hopes anyone picking up one his stories can find something they were looking for.
Drop in and see what he is up to at SamKnight.com. If you have something you want to say, leave a comment, or contact him at Sam(at)SamKnight(dot)com.

You have subscribed to alerts for Sam Knight.

You have been added to Sam Knight's favorite list.

You can also sign-up to receive email notifications whenever Sam Knight releases a new book.