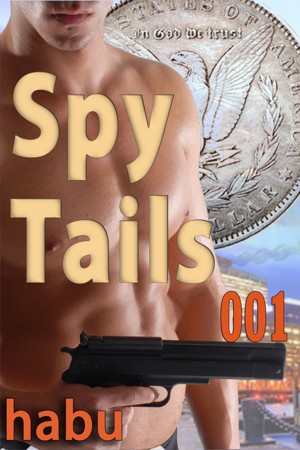 Habu is one of the pen names of a former supersonic spy jet pilot, intelligence agent, male model, movie actor, and diplomat. A wild youth in South East Asia was spent enjoying whatever sexual opportunities came his way, and much of his gay male writing is about recalling incidents from those days and inventing ones he’d perhaps have liked to experience. He now leads a very quiet and ordinary life.

Feedback and reviews are always appreciated.

This review also pertains to the follow up book Spy Tails 002. I'm not going to go through every story, just give an overview.

According to his Goodreads bio, habu "has lived extensively in East and Southeast Asia, the Middle East, and Europe as an embassy-based intelligence agent, which influences the settings and plots of many of his stories."

Apparently, he has experienced first hand the levels at which an Agency supposedly disapproving of homosexuality is happy to go to when it suits them.

A lot of the plots revolve around honey traps -- or the "Candy Store" as he puts it -- where leverage is obtained by giving someone what they want rather than torturing them.

The impact this has on the agent is lightly touched on, but never in depth which is a shame. You can tell some are happy to be used and abused, others have more difficulty coming to terms with it.

As could be expected, there are twists, backstabbing and betrayal.

And lots of lots of sex.

Some stories show how dangerous it is if feelings become involved.

Others show the irony that underlines a lot of intelligence gathering. One of my favorites was "Golden Question" in Spy Tails 002. Not so much for the plot or sex (they were fine) but because it captured what I feel is a little understood part of intelligence gathering, the accumulation of facts that aren't world shattering, just a "need to know". I loved the bit where the Green Berets had actually trained the Turks for covert operations, but they couldn't ask them where they were going to be deployed, as that might convey tacit approval. Reminded me of the Aussie SAS training the Kopassus!

Some stories show how just a little tweak can drastically change the course of events, but in real life, critics rarely balance this out, preferring to argue about the amount of time, money and effort spent gathering what ends up to be useless information. Who is to know what is important or not? Certainly not the person collecting it. That is the nature of the profession.

Perhaps what they should be debating is the damage this does on the lives and loves of those involved. Covert activities by civilians can also result in them suffering from PTSD, especially when lives are affected by their reports or actions, but is this ever taken into account?

Do we ever see the great John le Carré character, Smiley, actually smiling?

And if you're wondering whether a Government funded agency would ever allow this to happen? The author reassures the reader by stating:
This anthology is pure fiction.
Nothing like this would happen in the real intelligence world. Wipe from your mind even the slightest thought that anything like this has already happened in the collection of intelligence down through the ages. There would never be a special unit in U.S. intelligence, for instance, that collected intelligence the time-honored way—by providing sexual favors and subornation. There would never be an Agency special unit informally known as the Candy Store. This unit would not have five informally separated sections: male on female, female on male, male on male, female on female, and anything goes. There would certainly be no use of male homosexuality, and society’s censure of that, to recruit and control foreign intelligence assets as is fantasized."
That's a relief. Lol.

You have subscribed to alerts for Habu.

You can also sign-up to receive email notifications whenever Habu releases a new book.