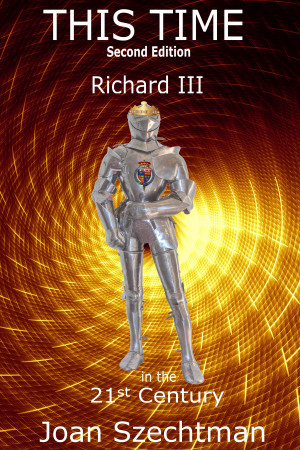 This Time: Richard III in the 21st Century--Book 1

By Joan Szechtman
Rated 4.00/5 based on 2 reviews
What if instead of dying in battle, Richard III awakens in the 21st-century? THIS TIME examines the medieval monarch as he adapts to modern technology, medicine, and American culture while investigating his past and what Shakespeare had wrought on his character.

Reviews of This Time: Richard III in the 21st Century--Book 1 by Joan Szechtman

Review
Viviane Crystal reviewed on Aug. 19, 2018
(no rating)
Just as Richard III is struck down at the infamous Battle of Bosworth, a time machine invented by scientists in the 20th Century transports Richard to Portland, Oregon in August of 2004. Hosgrove, the man who wants academic renown displays such an aggressive attitude to Richard that Richard is overwhelmed by the need to defend himself. Katarina, a scholarly linguist, is the compassionate one who manages to gently nurture Richard in this startling new environment. They want information from Richard, proof of the "two missing Princes" being alive and more, evidence Richard is unclear about no matter the time or place. In this new revised version, we have facts previously unknown but clarified with the discovery and reburial of Richard III’s remains in Leicester, England. Richard’s DNA led to truths about his physical condition and other revelations. Richard must adapt to a frighteningly different culture; but Richard is certainly meeting each challenge with aplomb, including how to use modern technology of computers and other daily conveniences we so take for granted. Being a man of integrity and passion, Richard wants to return to England of yore to save Anne his wife and his son Edward. One character will quit the project and must be cajoled back if Richard’s dream has the remotest dream of becoming reality. The emotional tenseness is one readers will feel as well due to the author’s superb characterization. Richard disappears until it is safe to return to work together with a team that is going to try to restore the life of a family member in Richard's original world. Hosgrove will turn toward Richard in a way that challenges credibility. At the same time, the reader is thrilled to see a romance develop in Richard’s life, one that is full of formidable challenges but more endearing for the way it evolves. The end of this story is a grand surprise. All in all, this is a most satisfying historical novel that demands a follow-up because readers will want to know how this story of royalty in the 21st Century evolves. Please! Quite a different take, a redeeming look at King Richard III, "Dick," or "Dickon," a man and leader who continues to intrigue old and new readers! Nicely done, indeed, Joan Szechtman! The audio edition is due to be released September 3, 2018: see: http://joanszechtman.com/blog/this-time-audio-edition

Shakespeare got it wrong!

When a wealthy history buff endeavors to unravel the truth about his favorite English king, he funds a time travel project. According to Shakespeare’s play, King Richard III was a hunchback who murdered his wife and two nephews, but he was wrong. The novel opens as Richard III fights his last battle, the one where he gets cut down in a bloody massacre, but time-travel scientists drag him into 2004. They leave a “look alike” body behind so that history remains in tact. Unfortunately the rich historian thinks he owns Richard. He plans to “question” Richard and send him back to die.

While I was reading this fascinating book, I wondered who I’d like to snatch from history. There are so many remarkable people I’d enjoy meeting, but my favorite would be Benjamin Franklin—a pivotal character in our country’s forming. He franchised businesses, started the postal system and lending libraries, and served as ambassador for his fledgling country. It would be fun to meet him.

King Richard III did not have much “fun” as his captors grilled him about his life. Since he was an intelligent soldier, he immediately tried to find a way to escape from his prison. Wouldn’t anyone? How can he survive in a strange new world? He must develop allies. The excellent narrative follows his journey from an archaic royal to a modern man. We appreciate his struggle to learn modern English and catch up on history, while we cheer his romantic adventures and quest to save his son.

The author helps us understand King Richard III in a way that Shakespeare never imagined. I don’t know much about English history, but I learned a lot about the problems that faced royalty of that time period from this well-written novel. I peeked at the sequel, Loyalty Binds Me, and I’m anxious to find out how Dickon (his favorite nickname) manages to get into more trouble during the next phase of the story. Buy this book and discover how Shakespeare got it all wrong in his famous play. (I’m still wondering how we can snatch Benjamin Franklin.)

A very Ricardian look at Richard III as a person and not just as a historical figure and how he might react to suddenly being thrust into 21st century American life.

It was a fairly quick read as it was only a couple hundred pages (in eBook form). There was just something about the book that I couldn't quite get into, and I think it was the CONSTANT eating and talking about food, there was at least one reference every couple pages if not more. I found the initial plot to be intriguing, and the time travel aspect did not bother me as much as I thought it might (time travel is one of my least favorite plot devices).

I am awaiting the sequel and I am hopeful it will pick up where This Time left off.

I would give the book 3.5 stars as 3 seems too few yet 4 seems to many, unfortunately I don't have that option and thusly I will be giving it 3.


* I have a slight amendment to m review: I bought and read this book because I spoke with the author and she was going to send me a review copy of the book that is the sequel, however after reading my review of the first book, she send me an email stating she didn't agree with my review and therefore would not be sending me the copy. I am not going to change the content of my review or my rating because that isn't fair to the book, but I just thought others should know if they ever deal with this author.