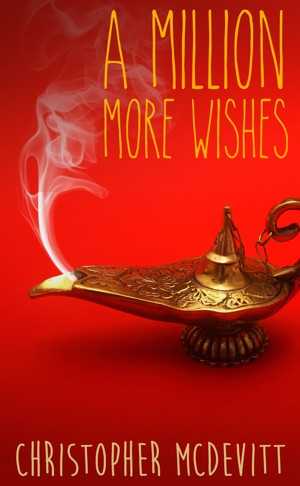 Chaos and hilarity abound as Dennis attempts to use the wishes offered by Djosar to better himself, his life and the world around him; often with disastrous and unplanned results. It's like a Shakespearean comedy of errors but way less preachy.

A Million More Wishes is the first book in Christopher McDevitt's planned multi-volume series," The One Million Wishes Saga." A former stand up comedian and generally awful person, McDevitt offers up a mix of entertaining dialogue and maniacal antics in this post-modern take on "The Monkey's Paw.

"'The One Million Wishes Saga' could have just as easily been called 'A Hitchhiker's Guide to World Religions I Googled.' I think people will be surprised at how little I had to make up. Surat 72. The turtle vs. frog argument. It's all out there. I just brought it together in a silly little story about a manboy and his genie...and a lot of dick jokes."
Available ebook formats: epub mobi pdf rtf lrf pdb txt html
First 17% Sample: epub mobi (Kindle) lrf more Online Reader
pdb
Price: $3.99 USD
Buy Add to Library Give as a Gift
How gifting works
Create Widget
Tags: vampire funny dream wish djinn genie lamp chris
About Christopher McDevitt

Christopher McDevitt is a former stand up comedian and generally awful person. The married father of one lives in New Jersey where he trains Brazilian Jiu Jitsu and dreams of getting the hell out of that state for a much warmer climate.

Reviews of A Million More Wishes by Christopher McDevitt

You have subscribed to Smashwords Alerts new release notifications for Christopher McDevitt.

You have been added to Christopher McDevitt's favorite list.

You can also sign-up to receive email notifications whenever Christopher McDevitt releases a new book.