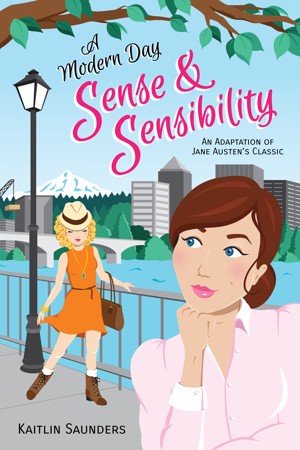 A Modern Day Sense and Sensibility

By Kaitlin Saunders
This modern take on a beloved classic retells the story of the Dashwood sisters as Ellie and Marianne struggle to find true love amid secrets, illness, and broken promises. More
Take a fresh look at the romantic Jane Austen classic in Kaitlin Saunders’s heartwarming new novel, A Modern Day Sense and Sensibility. After A Modern Day Persuasion proved a hit, this latest installment in Saunders’s successful series of Austen retellings will have readers swooning at the comical misunderstandings and classic romances that are newly envisioned for modern times.

After their father’s untimely death, Ellie and Marianne Dashwood must suffer the loss of both their beloved parent and their fortune when, together with their mother and younger sister, they find themselves at the mercy of their half brother and his greedy wife, Francil. Ellie temporarily finds solace in a new friendship with Francil’s brother, Edward. But as their connection deepens and Edward fails to make the next move, Ellie becomes increasingly confused. Eventually Francil’s manipulations become unbearable and the Dashwood ladies are forced to relocate to a dingy apartment building in Portland, Oregon, owned by their quirky cousin and his busybody mother-in-law, Mrs. Jennings. Slowly, the women begin adapting to their newfound meager lifestyle. While cutting coupons and watching their budget, the Dashwoods welcome the chance to make new acquaintances in their new town. One such acquaintance is Mrs. Jennings’s friend Brandon, a wealthy thirty-something hotel entrepreneur who is immediately infatuated with Marianne. Turned off by their relatively large age gap, Marianne turns her attention to the suspiciously perfect Jim Willoughby. But just as things start heating up between them, she learns that the situation may not be exactly as it seems.

As the sisters struggle through secrets, illness, and broken promises, Ellie and Marianne must find the answer: Does love really conquer all? Find out in Saunders’s romantic rendition of a beloved classic.

Kaitlin Saunders is proficient on the works of Jane Austen and finds that literature written by Austen serves to give her inspiration. At age sixteen, Saunders began her literary career writing her first screenplay, titled "Caroline," later bringing this period piece to life. She directed and produced this film, which gained popularity after being aired on local television. Her first novel, A Modern Day Persuasion, was published in 2011. Saunders and her husband enjoy cuddling up with their children and watching BBC as a family.

You have subscribed to alerts for Kaitlin Saunders.

You have been added to Kaitlin Saunders's favorite list.

You can also sign-up to receive email notifications whenever Kaitlin Saunders releases a new book.