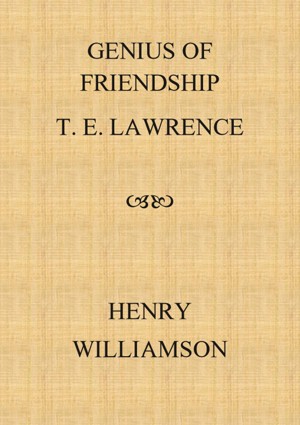 The writer Henry Williamson was born in London in 1895.

Naturalist, soldier, journalist, farmer, motor enthusiast and author of over fifty books, his descriptions of nature and the First World War have been highly praised for their accuracy.

He is best known as the author of Tarka the Otter, which won the Hawthornden Prize for Literature in 1928 and was filmed in 1977. By one of those extraordinary coincidences, Henry Williamson died while the crew were actually filming the death scene of Tarka.

His writing falls into clear groups:

1) Nature writings, of which Tarka the Otter and Salar the Salmon are the most well known, but which also include, amongst many others, The Peregrine's Saga, The Old Stag and The Phasian Bird.

2) Henry Williamson served throughout the First World War.The Wet Flanders Plain, A Patriot's Progress, and no less than five books of the 15-volume Chronicle of Ancient Sunlight (How Dear is Life, A Fox Under My Cloak, The Golden Virgin, Love and the Loveless and A Test to Destruction) cover the reality of the years 1914–1918, both in England and on the Western Front.

3) A further grouping concerns the social history aspect of his work in the 'Village' books (The Village Book and The Labouring Life), the four-volume Flax of Dream and the volumes of the Chronicle. But all of these groups can be found in any of his books.

Some readers are only interested in a particular aspect of his writing, but to truly understand Henry Williamson’s achievement it is necessary to take account of all of his books, for their extent reflects his complex character. The whole of life, the human, animal and plant worlds, can be found within his writings. He was a man of difficult temperament but he had a depth of talent that he used to the full.

The Henry Williamson Society was founded in 1980, and has published a number of collections of Williamson's journalism, which are now being published as e-books.

You have subscribed to alerts for Henry Williamson.

You have been added to Henry Williamson's favorite list.

You can also sign-up to receive email notifications whenever Henry Williamson releases a new book.