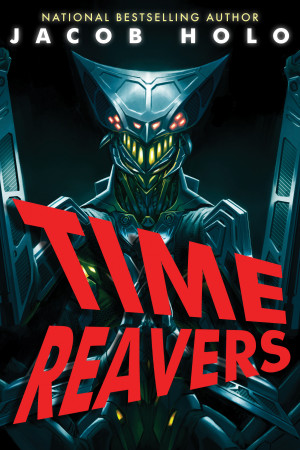 By Jacob Holo
The universe is a hamburger.

That’s what sixteen-year-old Nicole Taylor learns when a mysterious time-bending stranger saves her from a rampaging cyborg centipede.

See, the top bun? That’s our dimension. The bottom bun? That’s the monster’s dimension. And the patty? That’s a dimension where the two worlds meet – and the Reavers can attack. More
The universe is a hamburger.

That’s what sixteen-year-old Nicole Taylor learns when a mysterious time-bending stranger saves her from a rampaging cyborg centipede.

See, the top bun? That’s our dimension. The bottom bun? That’s the monster’s dimension. And the patty? That’s a dimension where the two worlds meet – and the Reavers can attack.

The Reavers are horrific cybernetic killing machines, and their plans for the top bun? Well, they’re as terrifying as you’d expect.

But Nicole isn’t helpless. She has a rare gift. She can bend time around her and even stop it completely.

Plagued with nightmares and ambushed by monsters at every turn, Nicole has one chance to stop the Reavers’ genocidal invasion. With help from a chain-smoking pyromaniac, a neurotic sword-wielding assassin, and an icy goth chick with a crossbow, she’ll make a stand against the evil bugs.

Because if the universe is a hamburger, the Reavers want a bite.

See what readers are saying about Time Reavers!

“After the fast opening, chapters rarely pass without a big, life-or-death battle, which leaves the novel in a nearly continuous intense state, which can be a bit overwhelming, though Holo’s clear descriptions prevent any confusion.” – Kirkus Reviews

★★★★ “Packed with action in nearly every chapter. If you enjoy fast-paced sci-fi/fantasy novels, you will really enjoy Time Reavers.” – Macarons and Paperbacks

“Action-packed, with characters that are interesting and a plot that kept me wanting to know more! I’m picky about science fiction, but this one sounded interesting, and I’m glad I gave it a try!” – Adventures Thru Wonderland

★★★★ “I thoroughly enjoyed this band of tau guards as they fought to save the world, all with a snarky sense of humor.” – Buried Under Books

Jacob Holo has been a recreational geek since childhood, when he discovered Star Wars and Star Trek, and a professional geek since college, when he graduated from Youngstown State University with a degree in Electrical and Controls Engineering. He started writing when his parents bought that “new” IBM 286 desktop, and over the years, those powers combined to push him to the next level of nerddom: a sci-fi author who designs intricate worlds and tech systems...and promptly blows them up in a string of nonstop action.

He is the author of seven books, including national bestseller The Gordian Protocol (with David Weber), military sci-fi The Dragons of Jupiter, YA urban fantasy Time Reavers (a Kirkus Reviews Best Indie Book of 2014), and the mecha space opera trilogy Seraphim Revival (Bane of the Dead, Throne of the Dead, Disciple of the Dead); and YA steampunk fantasy The Wizard’s Way (with H.P. Holo).

Between novels, Jacob enjoys gaming of all sorts, whether video gaming, card gaming, miniature wargaming, or watching speed runs on YouTube. He is a former-Ohioan, former-Michigander who now lives in South Carolina with his wife/boss H.P. and his cat/boss Nova.

You have subscribed to alerts for Jacob Holo.

You have been added to Jacob Holo's favorite list.

You can also sign-up to receive email notifications whenever Jacob Holo releases a new book.