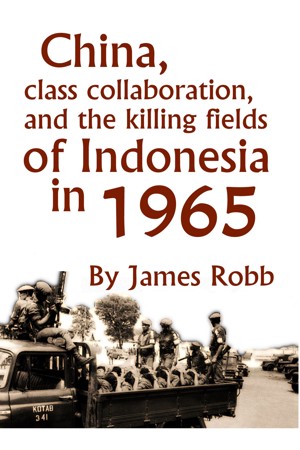 China, Class Collaboration, and the Killing Fields of Indonesia in 1965

By James Robb
An investigation into the political background to the 1965 anti-communist slaughter of a million Indonesian workers and peasants, comparing that event to the 1927 Shanghai massacre by Chiang Kai-Shek, when Chiang turned on his supporters in the Chinese Communist Party and killed thousands. More
The documentary film by Joshua Oppenheimer, The Act of Killing, released in 2012, provides a chillingly intimate portrait of some ageing thugs who, nearly fifty years ago, took part in one of the greatest acts of mass murder of the last century: the 1965-66 slaughter in Indonesia.

The principal targets of this act of terror were the workers and peasants of Indonesia, especially those who supported the Partai Komunis Indonesia (PKI,) the Beijing-oriented Indonesian Communist Party. This party, which had been the largest Communist Party in the world outside the Soviet Union and China, was reported in mid-1965 to have three million members, and perhaps another ten million sympathisers in various party-led mass organisations – unions, women's, youth organisations and others. The party and all its associated organisations were annihilated in the wave of violence.

The mass killing was orchestrated by the Indonesian military forces, led by the rightist general Suharto who seized power in a coup in October 1965. Many of the murders were actually carried out by rightist gangs working alongside the military. The frenzy of killing spread to include Indonesians of Chinese descent, teachers and other educated layers, and, as the film shows, the rightist thugs also took the opportunity to carry out personal vendettas. When some terrified PKI supporters appealed to the authorities to be spared, the price of staying alive demanded of them was that they denounce their friends and join in the murder spree themselves. Somewhere between half a million and three million people are estimated to have been killed.

The scale of the massacre is comparable with the later killing fields of Cambodia and Rwanda, and with the earlier Nazi holocaust in 1930s Germany. Yet in comparison with those events, the catastrophe in Indonesia remains largely unknown or forgotten by the wider world. The perpetrators of the crime remained entrenched in power for more than thirty years after the event.

How did it happen? How is it that the three-million-strong Communist Party, which at the beginning of 1965 was widely seen as powerful enough to challenge the power of the military, could be annihilated with so little resistance? The answer lies not in the psychology of the rightist generals and their militias, nor even in the support they received from the United States, but rather in the political character of the Communist Party itself.

This book traces the origins, evolution and political character of the Indonesian Communist Party, and in doing so, uncovers some remarkable parallels with an event forty years earlier in China, the Shanghai massacre of 1927.

Fully illustrated and annotated with links to further reading.

James Robb grew up in Wellington, New Zealand. During the 1980s and 1990s he worked in meatworks, car assembly plants, carpet and biscuit factories in Wellington, Hastings, and Auckland. Currently he is a high school teacher in Auckland.

You have subscribed to alerts for James Robb.

You have been added to James Robb's favorite list.

You can also sign-up to receive email notifications whenever James Robb releases a new book.