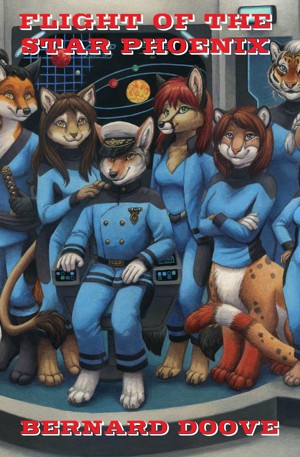 Flight of the Star Phoenix

I was born and bred in a suburb of Melbourne, Australia. I've always been a voracious reader, but I rarely wrote anything until I discovered the anthropomorphic (furry) fandom. Nowadays I am involved in many aspects of that fandom, including participating in conventions both locally and internationally. I have an orange tabby named Romulus who tries to make it difficult for me to write, but he purrs a lot while doing so, so I forgive him.

Reviews of Flight of the Star Phoenix by Bernard Doove

Why You Should Avoid This Author (Spoilers)

Flight of the Star Phoenix starts off with an intriguing plot. Kid of a very rich father has a contract where he borrows X billion dollars and has five years to pay it back and have no debt otherwise he becomes a wage slave in one of his father’s factories and this kid is the captain on the cover. That sounds like a great plot, but instead of focusing on Gary Stu, I mean Martin Yote’s precarious future, Doove just keeps introducing characters.

There are so many problems with this book, but the biggest and most grating is the fact that “good characters are good and bad characters are bad.” Martin fails to pay off his debt but his father laughs and gives him the company even though his four or five other siblings are far better businesspersons than him, oh, but they aren’t bitter in the least because Martin is “good guy.” There is a scientist who was born male, had dysphoria, mutated a virus to make himself a functional hermaphrodite, then was imprisoned for the rest of hir life because the virus accidentally got out. I can understand a truly retarded caveman society wanting revenge against a person because everybody now has extra parts, but I can’t understand a space faring society in the far future acting so hateful when the mutated virus also gave everyone an extended lifespan, so life extending scientist is punished because he was born under the star of “bad guy,” As if that wasn’t enough, a new character joins the crew after her lover was murdered on the ship and her long time friends/employers are imprisoned because of the crew, but that doesn’t matter because they were “bad guys” and she was “good guy.”

It could almost be forgivable if there was one character’s story that was completed start to finish in a believable way, but there wasn’t, unless you consider the one human “good guy” who was shot and killed, but we didn’t even see his ferret lover mourn for him, so no, still not believable.

You have subscribed to alerts for Bernard Doove.

You have been added to Bernard Doove's favorite list.

You can also sign-up to receive email notifications whenever Bernard Doove releases a new book.