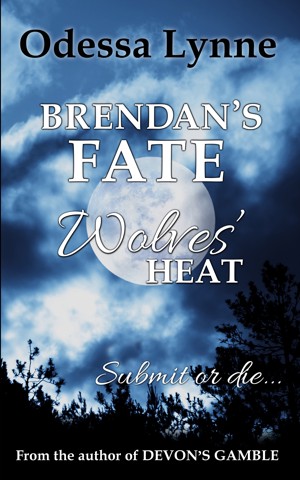 Submit or die… Brendan has no memory of who he is when he wakes up in the woods with an alien. Wolves, they’re called, with their wicked claws and sharp teeth, and they’ve shared Earth with humans for years. The only thing Brendan knows about Trey is that he’s a leader of the wolves—and that he’s already demanding more from Brendan than Brendan’s willing to give… Warning: explicit sex, language. More
Submit or die…

Brendan wakes up in the woods with a head injury and an alien named Trey, and no memory of who he is. Others of Trey’s kind are hunting them, and they want Brendan dead. The only thing standing between them and Brendan is Trey.

Wolves, they’re called, with their wicked claws and sharp teeth, and they’ve shared Earth with humans for years.

Book 3 of the Wolves’ Heat series continues the story that began with Ian’s Choice and Devon’s Gamble, where Brendan finally meets his fate…

This story contains explicit sex, graphic language, and sexual situations that some people might find offensive. Male/Male Sexual Content. Romance for anyone who likes hot male/male loving with a strong dose of Alpha romance!

Odessa Lynne loves to write fantasy romance. After years of reading romance, fantasy, and science fiction novels, Odessa discovered she liked romance in her fantasy, sex in her science fiction, and love between her heroes best of all! So that’s exactly what she puts in all her own stories now, for readers who enjoy the same. Visit odessalynne.com to find more information about current and upcoming releases. Odessa loves to hear from readers.

About the Series: Wolves' Heat

Once every three years, humans become sexual prey to a species that has no control over the urge to mate because of an unexpected and devastating attraction to human scent.

You have subscribed to alerts for Odessa Lynne.

You have been added to Odessa Lynne's favorite list.

You can also sign-up to receive email notifications whenever Odessa Lynne releases a new book.