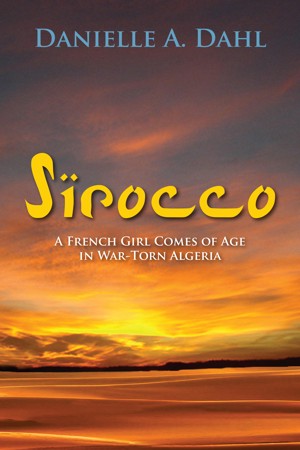 Sirocco: A French Girl Comes of Age in War-Torn Algeria

By Danielle A. Dahl
The Algerian War of Independence begins in 1954, forever changing the lives of the French colonials, including 10-year-old Nanna and her family. The conflict lasts for 8 years, but despite the constant threat of terrorist attacks, Nanna confronts the usual challenges of growing up--helping to raise her spirited siblings, struggling with math, and defying her harsh father by falling in love. More
On All Saints Day, 1954, the Algerian War of Independence from France begins, forever changing the lives of ten-year-old Nanna, her family, and a million-and-a-half French settlers. As Arab rebels carry out terrorist acts against civilians, hatred and bloodshed permeate the fabric of European and Muslim lives. A safe bus ride to town means keeping an eye out for stray shopping baskets containing hidden bombs. A day trip to the beach requires the protection of a military convoy. But life goes on, and Nanna’s loving mother, mischievous but good-natured siblings, and kind grandfathers provide plenty of adventure and humor. Nanna worships her Papa, who provides for his family and keeps them safe, but, growing up, she begins to understand that he is also a braggart with unyielding views of right and wrong, who believes that attending a supervised party with boys will compromise a girl’s virtue. Nanna defies him and falls in love, thus setting the stage for an ongoing clash of wills. As Nanna watches her beloved country torn apart by terrorism, she grieves for the French targeted by the fellagha and for the Arabs they slaughter because they are seen as pro-French. Ultimately, Nanna watches in anguish as the French generals, betrayed by De Gaulle, make a last stand for a French Algeria before laying down their arms. In the end Nanna’s family, like all the other French settlers, must choose between the suitcase and the grave.
Available ebook formats: epub mobi pdf rtf lrf pdb txt html
First 20% Sample: epub mobi (Kindle) lrf more Online Reader
pdb
Price: $4.95 USD
Buy Add to Library Give as a Gift
How gifting works
Create Widget
Tags: war of independence 1954 1962 french algeria french colonialism
About Danielle A. Dahl

From a family of fourth generation French settlers in Algeria, Danielle A. Dahl was born and raised in Constantine, where she came of age during the Algerian War of Independence. A week before Algeria celebrated self-rule and just before Danielle turned eighteen, she and her family fled their home and took refuge in France. Eight years later, she moved to the United States, where she studied commercial art. She and her husband Walter lived in Washington, D.C., Pennsylvania, and Illinois before retiring to South Carolina. Danielle has placed in several writing contests and published two creative nonfiction stories in the Petigru Review Literary Journal. You can find Danielle on the Web at www.dadahl.com.

Learn more about Danielle A. Dahl

Reviews of Sirocco: A French Girl Comes of Age in War-Torn Algeria by Danielle A. Dahl

You have subscribed to Smashwords Alerts new release notifications for Danielle A. Dahl.

You have been added to Danielle A. Dahl's favorite list.

You can also sign-up to receive email notifications whenever Danielle A. Dahl releases a new book.