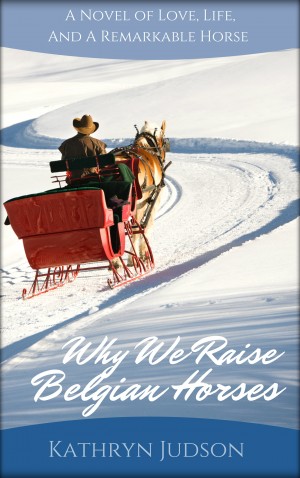 Why We Raise Belgian Horses

By Kathryn Judson
A descendant of Norwegian immigrants chronicles ancestral adventures in Dakota Territory and Norway, including several stories about Hans, an odd but friendly draft horse with a reputation as a scaredy-cat. More
When famine threatens a small fishing village in Norway, seventeen-year-old Lars is delegated to take his youngest brother Torvald with him to America, to live with Uncle Anders in Dakota Territory. The story is told by a descendant of Lars, who chronicles the adventures and misadventures of the boys and their friends and neighbors, including the story of Hans, an odd but lovable draft horse. The tales go on to include often-humorous accounts of courtship and marriage, as the boys grow into men.

Almost Hopeless Horse was inspired in part by her horse Yob, who was afraid of cattle. Trouble Pug combines a love of history, time travel stories, and her late husband's fondness for a pug that traveled the country with him in his younger days. Why We Raise Belgian Horses got its start in stories from her husband's Norwegian-American family, including a story his grandfather told of a horse with an unusual phobia. The MI5 1/2 series started off as a spoof of spy novels, but ended up being more serious than that in places (although still fairly silly overall). When she got tired of dystopian novels that ignore God and don't seem to understand that conversion is an option for people, she launched into the Smolder series, which also pokes sharp sticks into the evils of racism and social engineering, while still having fun with romance and friendship.

Mrs. Judson is an adult convert to Christianity. She has lived most of her life on the rain shadow side of Oregon, but has also lived and worked in Texas, South Dakota, and Wisconsin. She also long ago traveled through Central America, and Canada, and to Japan. Also way back when, she toured with Up With People, and as a lowly flunky helped put on a Superbowl halftime show. In her school days, she was active in community theater, both on and off stage. One summer during her newspaper days, she took time off and worked for a summer stock theater company in the Black Hills of South Dakota. These days, she lives in Kentucky, taking care of babies and toddlers of women who are in prison, jail, or drug rehab.

Always a history buff (even in grade school!), Mrs. Judson has switched in recent years to studying the history of the church, from the teachings and trials of the apostolic church right on up to the present day, with an emphasis on the persecuted church. She finds the Radical Reformation (the rise of the Anabaptists) especially intriguing.

You have subscribed to alerts for Kathryn Judson.