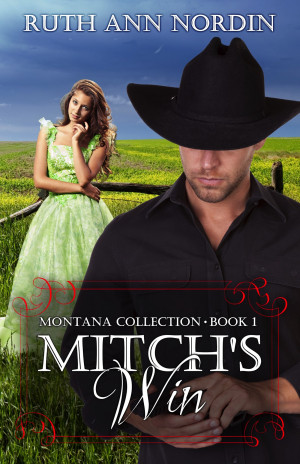 Heather sees this as her chance to get away from her brother and appeals to Mitch’s kindness to marry her, offering to help him care for two children and his ailing mother. He agrees and they start a life together. But Heather’s brother hasn’t gone away. And Mitch might find that being with her is going to take more than a poker game.

Ruth Ann Nordin has written seventy romances, ranging from Regencies to historical westerns to contemporaries. She plays with other genres from time to time, but her first love is romance. She has been happily married for eighteen years to a sweet and funny guy, and they have four sons, who are all taller than Ruth now that they're 12, 13, 14, and 16. The good thing is she doesn't need a ladder, and there's always someone to take care of a mouse that squeezes its way into her Montana home. She considers herself very lucky to have led such a charmed life. Being able to play with characters and create stories is just icing on the cake. Hopefully, she'll get to keep doing this many years to come.

About the Series: Montana Collection

Mitch’s Win by Ruth Ann Nordin
Montana Romance Series Book 1
Heather Curtiss was rather sheltered. She took care of her parents until both of them passed and then met a brother who had left home before she ever knew him. Now she wishes Abe never came home. Circumstances changed from Heather being sent out East to an aunt to suddenly get thrown into a kitty so her brother could continue to gamble!

Mitch Grady was not going to continue to bail his brother, Boaz, out. For two years now Boaz had been drinking and gambling, not taking responsibility for his life. Including his two children who were in Mitch's care until Boaz cleaned up his act. Mitch was done, no matter how much his mother pleaded with him. Who knew that this one last bail-out would end so well for Mitch.

The beginning of another good series from Ruth Ann Nordin. Mitch was at the right place and the right time to rescue Heather. And in the end, she rescued him. Once again these characters come to life and latch on to the readers heartstrings. Boaz is so lost after his wife dies and gets caught up a lifestyle he can't escape. Looking forward to Boaz’s Wager and Patty’s Gamble. You meet both of these characters in Mitch’s Win.
**Sexual content within marriage
**Historical Western Romance Rated R
http://justjudysjumbles.blogspot.com/2011/09/ruth-ann-nordin.html