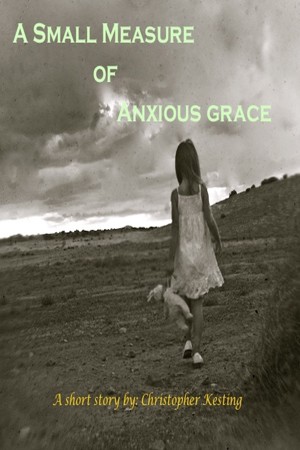 A Small Measure of Anxious Grace

By Christopher Kesting
Rated 4.50/5 based on 2 reviews
A small girl, racked with persistent and paralyzing anxiety, shows us that our perceptions of the world are far narrower than we could ever imagine. In fact, the world we experience is but a veneer over the real world. She alone holds the perceptive ability to see what we cannot. And perhaps warn us, should the need arise. More
Emmella is an anxious girl. She worries about the things most of us ignore or take for granted. She believes she can see things very few people can, experience events and causal relations before they even occur. Her mother is patient with her, trying to empathize and manage Em's anxiety. She assumes her daughter will grow out of this phase; but what she's about to realize is that maybe there's much more to Emmella's perceptions than just mere anxiety. And maybe it's time she start taking Emmella's observations a little more seriously.
Download: epub mobi (Kindle) pdf more Online Reader
rtf lrf pdb txt
Price: Free! USD
Add to Library
Create Widget
Tags: love hope redemption belief salvation enlightenment spiritual awakening precognition guardian angels paranormal abilities in children child savant
About Christopher Kesting

Christopher Kesting is the author of four novels. His debut novel, the futuristic sci/fi thriller Rubicon Harvest (October 2008) was followed by Thrones for the Innocent (June 2009), a paranormal tale of justice, fate and spiritual faith. His third novel, Envar Island (November 2011), is an epic science-fiction adventure that has also been adapted into an award-winning screenplay and is awaiting possible production. Kesting's most recent novel, This Garden of Souls (December 2013), is an existential mystery that challenges the way we perceive ourselves and our realities. It re-defines the concepts of human awareness, freewill and the Origin of Man through intricate analysis of the synchronicity that exist between every human interaction.

Mr. Kesting’s non-writing career is as a Certified Registered Nurse Anesthetist (CRNA). He has been practicing anesthesia for nearly 15 years, but writing creatively for as long as he can remember. Chris is originally from the Chicagoland area, but has called western Michigan home for over ten years.

Reviews of A Small Measure of Anxious Grace by Christopher Kesting

I really liked the calm, dignified tone of this story. Perhaps it could be a little longer to give the characters chance to expand, but otherwise you did a fine job - I was certainly engaged enough to care about them come the inevitable disaster at the end.

You have subscribed to Smashwords Alerts new release notifications for Christopher Kesting.

You have been added to Christopher Kesting's favorite list.

You can also sign-up to receive email notifications whenever Christopher Kesting releases a new book.