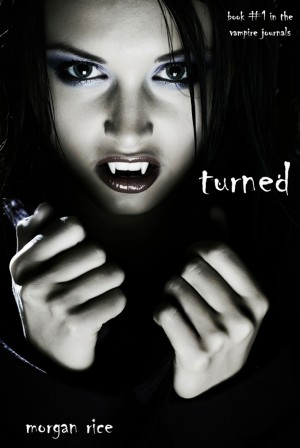 Turned (Book #1 in the Vampire Journals)

By Morgan Rice
Rated 3.73/5 based on 11 reviews
When 18 year old Caitlin Paine is uprooted and forced to attend a dangerous NYC high school, she begins to change, overcome by a superhuman strength. She needs to find out who she really is, who her real father was. She is helped by Caleb, a mysterious and powerful vampire, and they are in peril as a forbidden love arises--a love between races that will force them to risk it all for each other... More
"TURNED is a book to rival TWILIGHT and VAMPIRE DIARIES, and one that will have you wanting to keep reading until the very last page! If you are into adventure, love and vampires this book is the one for you!"
--Vampirebooksite.com

TURNED is book #1 in the #1 Bestselling series THE VAMPIRE JOURNALS, which includes 11 books (and counting).

In TURNED (Book #1 of the Vampire Journals), 18 year old Caitlin Paine finds herself uprooted from her nice suburb and forced to attend a dangerous New York City high school when her Mom moves again. The one ray of light in her new surroundings is Jonah, a new classmate who takes an instant liking to her.

But before their romance can blossom, Caitlin suddenly finds herself changing. She is overcome by a superhuman strength, a sensitivity to light, a desire to feed--by feelings she does not understand. She seeks answers to what’s happening to her, and her cravings lead her to the wrong place at the wrong time. Her eyes are opened to a hidden world, right beneath her feet, thriving underground in New York City. She finds herself caught between two dangerous covens, right in the middle of a vampire war.

It is at this moment that Caitlin meets Caleb, a mysterious and powerful vampire who rescues her from the dark forces. He needs her to help lead him to the legendary lost artifact. And she needs him for answers, and for protection. Together, they will need to answer one crucial question: who was her real father?

But Caitlin finds herself caught between two men as something else arises between them: a forbidden love. A love between the races that will risk both of their lives, and will force them to decide whether to risk it all for each other…

"TURNED is an ideal story for young readers. Morgan Rice did a good job spinning an interesting twist on what could have been a typical vampire tale. Refreshing and unique, TURNED has the classic elements found in many Young Adult paranormal stories. Book #1 of the Vampire Journals Series focuses around one girl…one extraordinary girl!...TURNED is easy to read but extremely fast-paced....Recommended for anyone who likes to read soft paranormal romances. Rated PG."
--The Romance Reviews

“TURNED grabbed my attention from the beginning and did not let go….This story is an amazing adventure that is fast paced and action packed from the very beginning. There is not a dull moment to be found. Morgan Rice did an awesome job bringing the reader into the story. She also made it easy to root for Caitlin and want desperately to her succeed in finding her truth….I will be looking forward to the second book in the series.”
--Paranormal Romance Guild

“Rice does a great job of pulling you into the story from the beginning, utilizing a great descriptive quality that transcends the mere painting of the setting….Nicely written and an extremely fast read, TURNED is a good start to a new vampire series sure to be a hit with readers who are looking for a light, yet entertaining story.”
--Black Lagoon Reviews

TURNED (Book #1 in the Vampire Journals), ARENA ONE (Book #1 of the Survival Trilogy), and A QUEST OF HEROES (Book #1 in the Sorcerer's Ring) are each available as a free download on Amazon.

Morgan loves to hear from you, so please feel free to visit www.morganricebooks.com to join the email list, receive a free book, receive free giveaways, download the free app, get the latest exclusive news, connect on Facebook and Twitter, and stay in touch! As always, if any of you are suffering from any hardship, email me at morgan@morganricebooks.com and I will be happy to send you a free book!

Also in Series: The Vampire Journals 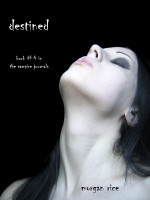 Well what can I say? It started off good, but went downhill before I got halfway through. Unfortunately it took a nosedive after that. I think the author may not have been in the right mood for continuing to write the story.
Try again.

One of the BEST VAMPIRE BOOK SERIES EVER!!!! (and trust me, I've read a lot of series, over 50) The series is very creative and keeps you trying to guess what will happen next. I couldn't stop, I had to continue through the entire series! The cover art is amazing.

WORST BOOK EVER! Seriously. Do not read this. At times I drove the people around me crazy with my complaining about how truly awful this book is. So why did I read it? you ask. Because hopefully this review will prevent some poor soul from being tricked into reading it. I've never been this harsh in a review before but I'm not even sorry. If I could give this book .25 stars I would. That way people would still see my review but it wouldn't be lumped in with the other bad books I've read before.

Let's start with the concept. Teenage girl and her evil mother and co-dependent brother move to a new school district. Teenage girl meets boy and falls instantly in love with him. On her way home from school she rescues him from bullies and (view spoiler). She loses her journal which really has no point in the story other than to relate it to vampire diaries. Girl and brother get in fight. Boy asks girl on date. (view spoiler) Seriously, that's the story.

If you didn't pick up on it there let me tell you now that almost every vampire stereotype is in this book. Every time girl meets one she describes the bad ones as evil and dressed and black and the good ones as peaceful and dressed in black. We get it, vampires are goths.

Then there were the errors. I don't just me in spelling and grammar. I mean in sonsistency. There were so many head scratching moments. How does she get her phone at the end for one.

Also, the co-dependent brother was so lame. You can't talk about how you rely on each other to survive then send him away after one fight just so he doesn't get killed in the later scenes. Clearly Rice has never seen Supernatural.

Then there are the evil vampires. Note to authors. DO NOT introduce a character and expect me to take him seriously if you have him say anything about a master plan. It was like the cheesy villain laugh.

The insta love was ridiculous and soooo cheesy. I can handle insta lust. That's a real thing. But there isn't one centuries old vampire that is going to prefess his love for some new thing after just an hour. It's ridiculous. Girl seriously has issues. She latches onto just about any male figure in the book. I'm surprised she didn't hump the leg of the substitute teacher.

But perhaps the most irritating part of the book was girl, also known as Caitlin. She was so annoying. Whiny and selfish, I wanted to kill her the entire time. Then, when she starts becoming vampirelike she will suddenly become cocky and superior and think humans are beneath her to change back into her whiny self a few seconds later. She was all over the place.

It was way too short for it to have any kind of quality at all. Everything was rushed which is probably why it seemed so ridiculous.

One star for potential and 2nd star because the first half was good. Last half I wanted to slap the lead female character because she was acting stupid and playing dumb. Did she seriously expect the hero who rescued her to fall in love with her after 20 mins? Seriously? You get a slap for stupidity girl. Action scene leading up to and during fighting where she was rescued was good. After that it got whiny and sloppy and made no sense. Couldn't finish it because I was getting to annoyed at the chick. Silly, silly girl!

Fantastic ... but beware ... you are going to want to get ALL the remaining novels as the story continues. There are quite a few typos which is surprising as the writing is awesome. The story line is going to hook you. Four stars only because of the typos. I admittedly could not put this one down and am currently on book #5.

(reviewed 7 days after purchase)
tanya hunter reviewed on July 21, 2011
(no rating)
i really enjoyed the book, it was a little short but i'm looking forward to see what happens in the others.

Decent storyline, good pace. The grammatical and spelling errors were distracting though.

Couldn't put it down, it just kept the pace going from start to finish; I felt out of breath just reading it. Well done.

Like the other reviewers, I loved this short, fun story! And, like them, I'm looking forward to more.

I really enjoyed this book, it was a bit short tho, but it left you hanging to find out what happens next. Can't wait.

You have subscribed to alerts for Morgan Rice.

You have been added to Morgan Rice's favorite list.

You can also sign-up to receive email notifications whenever Morgan Rice releases a new book.