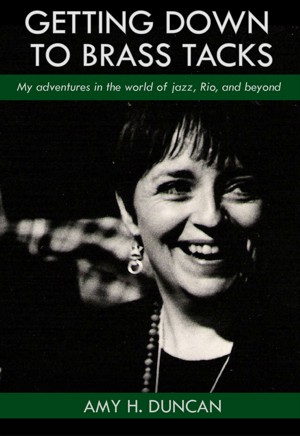 Getting Down to Brass Tacks - My Adventures in the World of Jazz, Rio, and Beyond

This riveting autobiography takes us through Amy's childhood—a nostalgic odyssey which paints a vivid portrait of life in Connecticut, including a UFO sighting and a surprise meeting (as she was on her knees, mopping up spilled coffee) with Marilyn Monroe. Then we move on to her college and young adult years in Boston, and finally her time in New York, trying to make it in music. But her efforts to become a working jazz pianist were at odds with a longing for love and a family life, and her choices led her into unexpected paths. Added to these opposing forces was a dream to visit Brazil, thanks to the impact of the movie "Black Orpheus," which she had seen when she was in college. Amy's adventures later on of getting to Brazil for the first time on little money with a five-year old in tow, are both exciting and inspiring, as she is helped by many kind strangers to reach her goal.

Years later, she returns to Brazil, this time to Rio de Janeiro, where she gets deeply involved in Rio’s famous Carnival and the samba scene, and reforms the band she had started in New York—Brass Tacks—with Brazilian musicians. They record a CD, “My Joy,” in 2002, and play in various venues in Rio and São Paulo.

During her earlier years as a music journalist in Boston and New York, Amy met and interviewed many luminaries, including James Taylor, Dizzy Gillespie, and Paul Simon. The book opens with an unusual, humorous encounter with Miles Davis in his apartment in New York in the 1980s.

A spiritual seeker from an early age, Amy spent years investigating various religions and philosophies. But when she finally discovered the answers she was looking for, she found herself struggling to live up to the demands of following a spiritual path in the midst of many activities and distractions, and nearly lost her way. Eventually, though, she was able to overcome those obstacles, and concludes her story on a note of hope and renewal.
Download: epub mobi (Kindle) pdf Online Reader
Price: Free! USD
Add to Library
Create Widget
Tags: spiritual journey selfdiscovery rio de janeiro travel adventures spiritual being in a physical body women in jazz
About Amy Duncan

Amy Duncan is an American musician and writer who has been living in Rio de Janeiro, Brazil for over a decade.
She began her musical career in Newtown, Connecticut, USA at age 15, when she gave up her classical piano lessons and taught herself how to play jazz. By the time she was 16, she was gigging around the area with local bands.
After a year and a half at Boston University, studying languages and literature, she dropped out, got married, had a baby, and became part of the avant-garde jazz scene, led by saxophonist Sam Rivers.
Some years later, after she split up with her second husband and was the mother of two daughters, she gradually worked her way into a job as music writer for The Christian Science Monitor. But jazz was still uppermost in her mind, and in 1981 this led her to move to New York City, the jazz mecca for all aspiring jazz musicians.
After around three years of gigging around Manhattan as a solo pianist and in duos and trios, Amy decided to form a larger band to try out her skills as a writer and arranger. She soon formed an unusual ten-piece ensemble that consisted mostly of brass instruments, including two euphoniums and a tuba. This band, which she named Brass Tacks, played at numerous venues around the city, including the Blue Note and the Knitting Factory.
In 1990 Amy started to take an interest in Brazilian music, especially samba. She learned Rio-style percussion, and ended up visiting Rio de Janeiro and playing in the percussion sections of several samba schools in that city’s famous carnival parades. It wasn't surprising that Amy's love for Brazilian music would rub off on her compositions and arrangements for Brass Tacks.
In 1999 Amy made a definitive move to Rio de Janeiro, after living there for two years in 1993-4. In 2001 she put together the Brazilian version of Brass Tacks and recorded her first CD, “My Joy,” the following year. After playing numerous shows in Rio de Janeiro and São Paulo, the band became temporarily inactive while Amy worked on her autobiography, “Getting Doown to Brass Tacks” — her first full-length book.

You have subscribed to alerts for Amy Duncan.

You have been added to Amy Duncan's favorite list.

You can also sign-up to receive email notifications whenever Amy Duncan releases a new book.