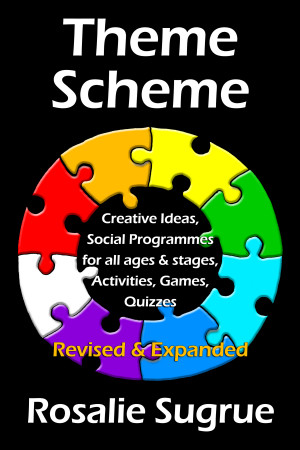 In the Games section, these games have been added: Who Stole the Cookie from the Cookie Jar?; I wrote a letter to my love; Hunt the Slipper, What’s the Time Mr Wolf, Hide and Seek, Sardines, fun and games in the swimming pool, Oranges and Lemons; Large Ball Relays; Bullrush; Scavenger Hunts and Eating Chocolate off a plate.

Other games have been revised to make the instructions clearer and to allow for less mobile participants.

In the Quizzes section extensive lists of Words within Words and a selection of Bible riddles have been added.

Countries statistics have been updated to include the latest population sizes and life expectancy.

Book Description:
_______________
This revised and expanded edition of Theme Scheme offers you a wealth of creative ideas, activities, games, puzzles, plays and quizzes to help plan, organise and lead your group’s programmes. All are fun and practical, requiring minimal equipment, resources and time to prepare.

Games are a wonderful way for folk to mix and get to know one another. There are easy instructions for indoor and outdoor games suitable for active, young people, through to less mobile, older people. Great for convenors, leaders, teachers and diversional therapists.

The book also includes sound, straightforward guidelines for running small group meetings, covering rules for happy meetings, an agenda and minutes structure, and the role of the person leading the meeting.

Special Sundays and church related activities through the year are highlighted. This section also notes related plays and readings in Rosalie’s companion book Ten Plays: Short, easy dramas for churches (available in print and as an eBook).

The last two sections of material for themed quizzes and trivia competitions on general and Bible topics will keep your group entertained and interacting with each other throughout the year.

Rosalie Reynolds Sugrue is a fifth generation West Coaster. Both her parents being fourth generation Coasters whose forebears came seeking gold. Rosalie’s great grandfather, James Reynolds, was a local preacher from Cornwall who preached to miners on the beaches and helped establish the first Methodist church in Hokitika. His wife, Eliza, signed the petition that gave women the vote.

Rosalie’s mother Elva Reynolds was a Methodist Deacon and also a lay preacher. Rosalie is a past president of the NZ Lay Preachers’ Association, and the inaugural facilitator of the Methodist Lay Preachers Network 2004, serving as a co-facilitator until 2008. She has led hundreds of church services in New Zealand and the UK. She has also led rest home services, family services, cafe style worship, house blessings and devotions at Methodist Conference and in many other situations.

A wife, mother, grandmother, great grandmother and author, Rosalie is a retired teacher, and has also worked as a psychiatric nurse and motellier. She has been active in Jaycees, the Methodist Women’s Fellowship, the Community of Women and Men in Church and Society, National Council of Women, the Churches’ Agency on Social Issues, Victim Support and U3A. She continues an active role as a lay preacher leading one to three services every month in a variety of churches.

You have subscribed to alerts for Rosalie Sugrue.

You have been added to Rosalie Sugrue's favorite list.

You can also sign-up to receive email notifications whenever Rosalie Sugrue releases a new book.