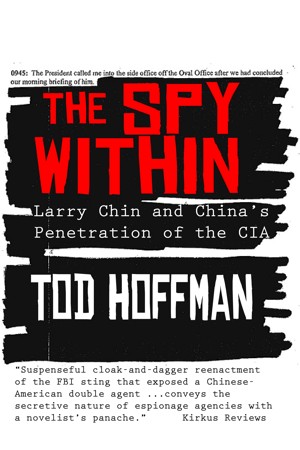 The Spy Within: Larry Chin and China's Penetration of the CIA

By Tod Hoffman
Written with a novelist’s panache, this is the true story of the Chinese spy who penetrated the CIA, and for 30 years revealed America’s intelligence secrets to his masters in Beijing. Larry Chin, the CIA’s top Chinese linguist, was China’s top spy.
“A successful cloak-and-dagger reenactment of the FBI sting that exposed a Chinese-American double agent in 1985, “ said Kirkus. More
The Spy Within is the riveting true story of one of the most significant cases is the history of espionage—the penetration of the CIA by a Chinese spy for 30 years. Larry Chin was as a double-agent whose spying encompassed such pivotal events as the Korean War, the Cultural Revolution in China, the Vietnam War, and Nixon’s groundbreaking visit tor Beijing. Chin’s reports were circulated to China’s top leaders and read by Mao, Zhou Enlai and Deng Xiaoping.

“Suspenseful cloak-and-dagger reenactment of the FBI sting that exposed a Chinese-American double agent in 1985…Hoffman possesses a solid command of his material and conveys the secretive nature of espionage agencies with a novelist’s panache,” said Kirkus.

Tod Hoffman, author of four books, was an officer with The Canadian Security Intelligence Service for eight years. His forthcoming book "Al Qaeda Declares War: The African Embassy Bombings and America's Search for Justice' is being released by University Press of New England in 2014. He lives in Montreal.

Reviews of The Spy Within: Larry Chin and China's Penetration of the CIA by Tod Hoffman

You have subscribed to alerts for Tod Hoffman.

You have been added to Tod Hoffman's favorite list.

You can also sign-up to receive email notifications whenever Tod Hoffman releases a new book.