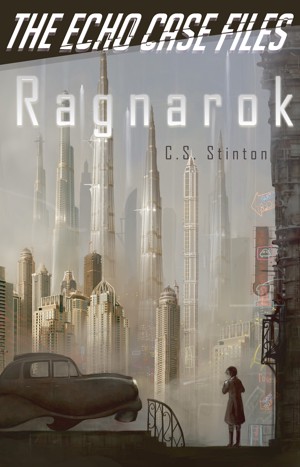 By C.S. Stinton
The six star systems of the Orion Confederacy are under attack from an enemy humanity never expected and cannot understand. And the crime rate’s through the roof.

Corrupt politicians with unstoppable ambition. Violent terrorists with stolen military hardware. Crooked cops with truly terrible coffee. Sounds like the average case for a Confederate Marshal. More
The six star systems of the Orion Confederacy are under attack from an enemy humanity never expected and cannot understand. And the crime rate’s through the roof.

While the Null War rages on border worlds, the average citizen is more likely to be murdered by their neighbour than killed by the enemy. This is true most of all on the planet Thor, in the grips of the violent terrorists denouncing the government who call themselves 'Ragnarok' - for now is the end of all worlds. Police are targeted, peaceful protests turn to gun battles, civilians are shot in the streets, and they’re using stolen military weapons to do it all.

Into this chaos are sent Commander Sara Ramirez and Lieutenant Maggie Tycho, Marshals with the mandate to hunt criminals across the Confederacy. Their only guide is John Harrigan, a disgraced Marine whose freedom depends on his helping them - and who seems to know more than he’s letting on. But Thor is a hot-bed of corruption and as humanity fights a war for its survival, Ramirez and Tycho find themselves fighting for a whole world - and, while society burns, the humanity in themselves.

CS Stinton was born in London, grew up in Hertfordshire and Paris, went to university in Lancaster, and drifted about until the churning words that demanded writing eventually turned into a coherent book.

Growing up, reading was something to do even sneakily after bed-time, and she went on to be a lover of Nicholas Evans, Louis de Bernières, Terry Pratchett, and many more. Inspirations for science fiction came from another source, her brother inflicting Star Wars and Star Trek on her at a young age until she realised she actually liked it.

Writing her own stories became inevitable, though they've taken many forms. The unspoken tales in her head, the adventures explored and told through role-playing games, a vast array of fiction (even, shockingly, fanfiction) which made its way to the internet over the years. Some of this she'll even own to writing, but 'Ragnarok' is the first story she'll call an actual book and send out to public eyes under her own name.

About the Series: The Echo Case Files

Survival often forgets justice. Humanity stands on the brink of destruction, locked in an interstellar war against a mysterious foe bent on nothing but their eradication - and the crime rate's through the roof. The Echo Case Files follows the story of Echo Team, a pair of elite law enforcement agents on a battle to mete out justice and peace for humanity, while their civilisation faces its end.

You have subscribed to alerts for C.S. Stinton.

You have been added to C.S. Stinton's favorite list.

You can also sign-up to receive email notifications whenever C.S. Stinton releases a new book.