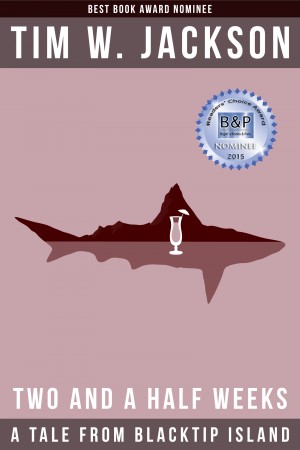 Two and a Half Weeks

By Tim W. Jackson
Rated 4.00/5 based on 1 review
Caribbean dive guide Gage Hoase woos and wins a beautiful dive guest, then sends her packing. All is good until Gabi returns, with happily-ever-after in mind. Now Gage has to figure a way to let her down gently before she offs him in his sleep.

Tim W. Jackson’s first taste of scuba diving came at the age of six when he sneaked breaths off his dad’s double-hose regulator in the deep end of the pool. Later, as an ex-journalist armed with a newly-minted master’s degree in English, he discovered he was qualified to be a bartender, a waiter or a PhD student. Instead he chose Secret Option D: run off to the Cayman Islands to work as a scuba instructor and boat captain by day and write fiction at night. Two decades later, he still wishes that was half as interesting as it sounds. Or even a quarter . . .

Jackson is the award-winning author of the comic Caribbean novels Blacktip Island and The Secret of Rosalita Flats, as well as The Blacktip Times humor blog. His “Tales from Blacktip Island” short stories have been published in literary journals worldwide. He is currently concocting his next Blacktip Island novel and still enjoys scuba diving with his dad’s old double-hose reg.

A portion of the proceeds from his stories goes to the Nature Conservancy’s Coral Reef Preservation Fund.

Reviews of Two and a Half Weeks by Tim W. Jackson

You have subscribed to alerts for Tim W. Jackson.

You have been added to Tim W. Jackson's favorite list.

You can also sign-up to receive email notifications whenever Tim W. Jackson releases a new book.