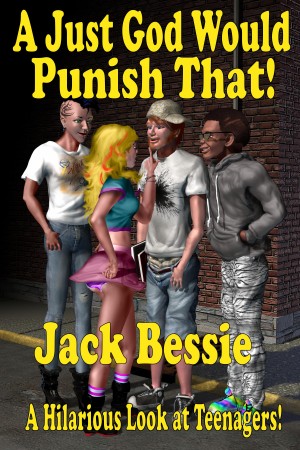 A Just God Would Punish That! A Hilarious look at Teenagers

By Jack Bessie
Jack Bessie and his wife raised five bio kids, and then adopted six more. This book is a collection of two page humorous essays on every possible aspect of herding teens. Grouped by subject; school, sex and dating, self esteem issues, chores, and more. The titles of each piece are things the teens actually said, snide, stupid or absurd. A funny, and deeply personal look at life with teens. More
Jack Bessie and his wife raised five biological teens, and then adopted six more. A Just God Would Punish That! is a collection of almost two hundred, two page essays on every possible bit of craziness teens can be responsible for. Titles such as, Don’t Answer the Phone if the Police Call, How Can I Like Myself Driving That Car?, and I Don’t Recall Asking for Your Opinion! capture the zaniness of life with teens wonderfully.
School, sex and dating, dishonesty, self esteem issues, body image, chores, punishment; the book leaves very little untouched and un-made fun of! Considering that most of the titles come from something snotty, sarcastic or stupid that was uttered by one of Jack’s herd, you get a hilarious glimpse at what the Bessie household had to suffer through, raising eleven of the wily critters called teenagers! A very funny, but warmly personal look, that will strike a chord with any other teen parent, and make non-parents sigh with relief!
Available ebook formats: epub mobi pdf rtf lrf pdb txt html
First 10% Sample: epub mobi (Kindle) lrf more Online Reader
pdb
Price: $2.99 USD
Buy Add to Library Give as a Gift
How gifting works
Create Widget
Tags: humor growing up teens teenagers discipline disobedience craziness
About Jack Bessie

Jack Bessie is a child of the corn belt, who grew up shy and rather isolated, chasing critters and working on the neighbor’s farm. An avid reader from an early age, he was obsessed with learning, especially science. He hated English, which is a superb irony, considering how many millions of words of prose he has written in his later life; it would appear that God does indeed have a fine sense of humor or at least a fondness for satire and irony!
Jack’s college experience was fanatical and obsessive, involving ridiculously intense bouts of reading and self motivated study, interspersed with much drinking and the chasing of women. He devoted a large portion of his study to psychology and communications, dropping out without a degree, but with an astoundingly wide and deep education. He also accumulated a pregnant wife along the way. The chasing of women was productive at least!
Jack’s work history is as interesting as his college journey. He’s been a hospital orderly, janitor, research assis-tant, draftsman, cook, plumber, electrician, home builder, and master cabinet maker, the trade his father plied. One of the high points of his work life involved being fired from two different but equally lousy jobs in the same day!
Jack and his second wife raised five biological chil-dren, and then were crazy enough to adopt six more. He’s never been noted for moderation. They are now content to herd their cats, Beatnik, Funky Kitty, and Lucifer.
Honestly, Jack hasn’t gotten any less excessive, as you might notice from reading his writing. His life has given him an endless panoply of things to make fun of and to think deeply about, which he endeavors to share with his readers and fans. The author of ten novels, and a million words of humor and insight, Jack is always writing, and has no plans to ever retire.
Jack also designs games, and teaches novel writing, and is once again serving as a judge for the Global eBook awards! There’s no dust on him from sitting around!

Reviews of A Just God Would Punish That! A Hilarious look at Teenagers by Jack Bessie

You have subscribed to alerts for Jack Bessie.

You have been added to Jack Bessie's favorite list.

You can also sign-up to receive email notifications whenever Jack Bessie releases a new book.