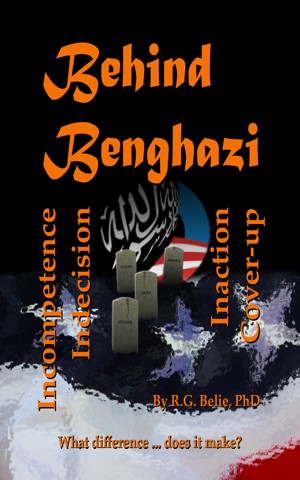 By R.G. Belie, PhD
On September 11th, 2012, the US consulate in Benghazi, Libya was attacked by terrorists resulting in the deaths of the US Ambassador and three other Americans.
The self described “most transparent” administration has failed to come clean for more than a year, but now you can look under the cover up to understand the gross incompetence and manipulation that is the real story “Behind Benghazi”! More
In the fall of 2012, the administration of Barack Obama was singularly focused on re-election. Obama himself had demonstrated over the entirety of his first term a complete lack of interest in the day to day details of running a government, but now he was in his element… Campaigning! Nothing was going to divert him doing what he did best, winning elections. Unfortunately, he had surrounded himself with others of his political bent and lack of experience who were now tasked, in his self imposed campaigning absence, with making the ship of state appear to be sailing smoothly even as it was slowly sinking.

Nothing was to get in the way of re-enforcing the administration’s talking points of terrorism on the run or the building of unquestioned worship of Obama in spite of his lack of managerial skill and accomplishment. No scandal or crisis was too large to sweep under the rug until after the election. In this setting, providing security against terrorist attack seemed unnecessary as they now believed their own self serving propaganda. Even when the inevitable attack occurred, the focus on re-election could not be side tracked for yet another “dust up” in the Middle East. There was no response, no valiant effort at rescue, no cancelling of business as usual, until the magnitude of the impact on the election was realized.

What then occurred in the White House was the purposeful launch of the biggest deception, the biggest cover up, the biggest lie in the history of the republic. This cover up continues today with an energetic effort to block any information or informed discussion of the inept planning, the inaction, or the deceitful diversion. As a result, the story of Benghazi remains a mystery.

R.G. Belie, PhD, has worked for over 40 years in the government and private industry as an engineer, technologist, and problem solver. He is now applying his experience and problem solving skills to addressing the pressing issues of the day along with enjoying the pursuit of various types of high quality photography including 3D stereographics, High Dynamic Range, and digital art. 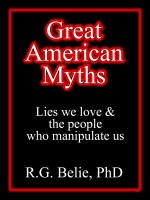 Reviews of Behind Benghazi by R.G. Belie, PhD

You have subscribed to Smashwords Alerts new release notifications for R.G. Belie, PhD.

You have been added to R.G. Belie, PhD's favorite list.

You can also sign-up to receive email notifications whenever R.G. Belie, PhD releases a new book.