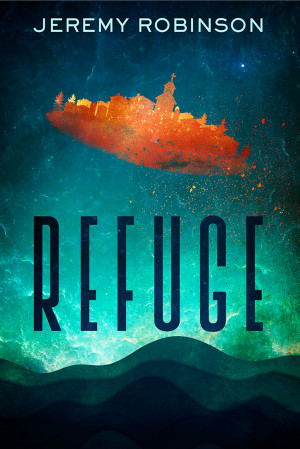 Refuge is a novel that was released in five parts from international bestselling author Jeremy Robinson, but it is now available as one complete read. So enjoy the whole completed novel. You’re in for a creepy ride. More
Refuge, New Hampshire, is a small town. The kind found on postcards. Their biggest concern is the rowdy summertime revelers making their way up from Massachusetts and New York. And with most of the town’s residents in neighboring Ashland, for the Fourth of July fireworks show, Refuge is quieter than usual. That is, until the Baptist church’s bell starts ringing—on its own.

The bell chimes faster and faster, reaching a frenetic pace, as though rung by the Devil himself. But the bell is just the beginning. The air shimmers. The night-time sky fills with a burning red aurora. The moon, previously a crescent, is now full. And just hours after dusk, the sun returns to the sky, revealing an endless desert where there was once a mountainous pine forest.

Led by ex-Army Ranger turned surrealist painter, Griffin Butler, Sheriff Rebecca Rule and her deputy, Helena Frost, the residents of Refuge must weather an ever changing onslaught of otherworldly dangers while trying to uncover how and why the landscape beyond town shifts every time the church bell tolls.

As a sequence of horrific events threaten to destroy the town, the residents must band together, search for answers and find a way to defend their homes, or Refuge will be lost.

Refuge is a novel that was released in five parts from international bestselling author Jeremy Robinson, but it is now available as one complete read. So enjoy the whole completed novel. You’re in for a creepy ride.

Jeremy Robinson is the international bestselling author of fifty novels and novellas including MirrorWorld, Uprising, Island 731, SecondWorld, the Jack Sigler thriller series, and Project Nemesis, the highest selling, original (non-licensed) kaiju novel of all time. He’s known for mixing elements of science, history and mythology, which has earned him the #1 spot in Science Fiction and Action-Adventure, and secured him as the top creature feature author.

Robinson is also known as the bestselling horror writer, Jeremy Bishop, author of The Sentinel and the controversial novel, Torment. In 2015, he launched yet another pseudonym, Jeremiah Knight, for two post-apocalyptic Science Fiction series, beginning with Hunger. Robinson’s works have been translated into thirteen languages.

His series of Jack Sigler / Chess Team thrillers, starting with Pulse, is in development as a film series, helmed by Jabbar Raisani, who earned an Emmy Award for his design work on HBO’s Game of Thrones. Robinson’s original kaiju character, Nemesis, is also being adapted into a comic book through publisher Famous Monsters of Filmland, with artwork and covers by renowned Godzilla artists Matt Frank and Bob Eggleton.

Born in Beverly, MA, Robinson now lives in New Hampshire with his wife and three children.

You have subscribed to alerts for Jeremy Robinson.

You have been added to Jeremy Robinson's favorite list.

You can also sign-up to receive email notifications whenever Jeremy Robinson releases a new book.