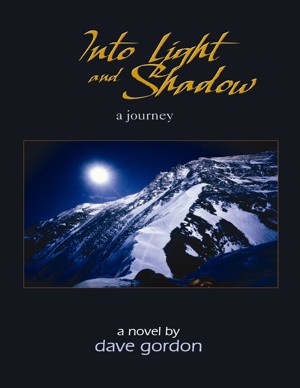 Into Light and Shadow : A Journey

By Dave Gordon
A twenty-first century chronicle of one man’s unique spiritual journey in the tradition of Dante’s Inferno. More
Synopsis of Into Light and Shadow: A Journey

Steve Forrest had always put himself first; he had built himself an enviable life, but it wasn’t enough. There was one more prize to claim.

Mount Everest is the greatest challenge in high altitude mountaineering, the goal of a lifetime’s preparation. To summit is to conquer. Others see the mountain differently. It is sacred to Sherpas. They call it Chomolungma, Goddess Earth Mother of the World.

It would prove to be the start of a journey, not the end of one; a spiritual journey unique to Steve, one that would utterly reshape his life. The mountain would take everything he had ever worked for but his battered ego. It would leave him alone, empty and exposed, a helpless invalid.

Enter Father Jack, a man whose appearance is as extraordinary as his story, for he is both a Catholic priest and a Zen monk. Here begins Steve’s real journey, a journey of spiritual ecumenism, bringing east and west together.

This novel reincarnates, if you will, Gautama Buddha (although Jack would say otherwise), leading Steve down the path the Buddha took himself thousands of years earlier on his quest for enlightenment. But the path will deviate to Steve’s Christian past and the spirituality of his forebears, as it must. Following close is a demon that in Buddhism has a name. As it once challenged the Buddha, it will now challenge Steve.
Download: epub mobi (Kindle) pdf more Online Reader
lrf pdb txt
Price: Free! USD
Add to Library
Create Widget
Tags: experiences with god path to entlightenment spiiritual path
About Dave Gordon

Dave Gordon was born in Wyoming. He grew up in eastern Washington State, graduating from a Jesuit high school and later a Jesuit university.

After leaving the Catholic Church in the late 1960s, it took him thirty years of searching to discover a spiritual practice that made sense to him. As the new millennia arrived, he began visiting Zen monasteries, and was lay-ordained a Zen Buddhist monk in 2011. Dave continues his personal practice and studies with a local teacher.

After forty years Dave retired from mountaineering, although he still enjoys alpine backpacking and the occasional mountain “scramble”. He was a climber on the North Ridge 1995 Mt. Everest Expedition, an independent expedition organized by the climbing team.

In 1990, he helped drag the bodies of two teammates and a Sherpa off Manaslu, the eighth highest mountain in the world. The incident on the “Mountain of the Spirit” changed his spiritual path forever.

Reviews of Into Light and Shadow : A Journey by Dave Gordon

You have subscribed to alerts for Dave Gordon.

You have been added to Dave Gordon's favorite list.

You can also sign-up to receive email notifications whenever Dave Gordon releases a new book.